Review: Sentinel Tactics – tension of being a superhero 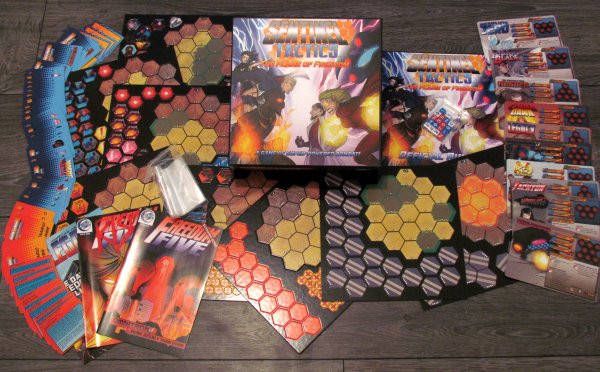 The Earth is a corrupted place, that needs to be healed. People think only of themselves and exploit others, always just as they can. I experienced it firsthand, and it was also the moment, when I realized it. I am not a superhero, I always dreamed of being. I do not want to save those ungrateful and arrogant characters. In eyes of the people, I will be dangerous and evil, but I will save only those, who deserve it. So nobody! Hahaha!

And so, in humanity´s darkest moment comes boardgame Sentinel Tactics. Authors are Christopher Badell, Kevin Gregory Nunn and Luther V. Bell Hendricks. Illustration were created by Adam Rebottaro and all needed help of Paul Bender. All together, they form a team of Greater Than Games, which released our favorite Sentinels of the Multiverse (review). This new game is set in the same comics world, which arrived on the market in 2014. Game was supported in its birth by Kickstarter and over 2,000 fans with total amount of over $ 300,000.

Entire game is hidden in a superhero box. On one side of the lid are heroes, and on the other all villains. These groups will clash soon. We still take advantage of last moment of peace and slip between them inside the box. There are waiting for us in the first place cardboard sheets, that hide the whole world. Specifically, eight large tiles of double-sided maps, which are composed of many hexagonal arrays, each fitted with some polka dots indicating leverage of that place (from one to four). Each side belong to one environment. 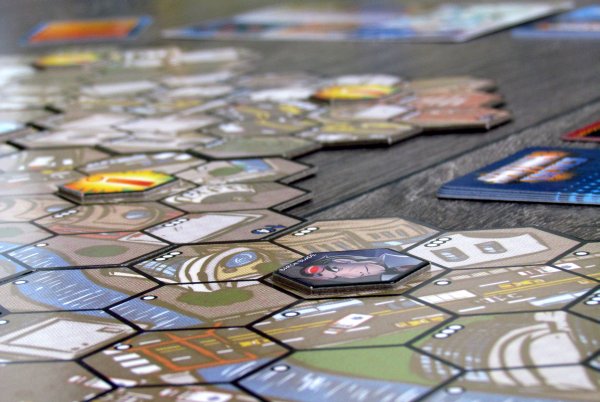 Also a large variety of tokens is hidden in these sheets. They will help players to adjust skills, record health and effects. Eighteen hexahedral dice are only next step on our way to deck of cards. Ten of them have large dimensions and are dedicated not only heroes, but also to their enemies. Each such card contains several fields for health, trio of numbers (action, defense, movement) and also skills. One side of the card describes background of that character, continuing where Sentinels of the Multiverse left off. Each of the heroes has also his several cards. There are 92 of these in total and always describe any other options for side, both good or evil.

Every game is preceded by scenario selection. Players always have to divide roles of heroes and villains among themselves. Then each will also select their specific role and from that character receives one big and a set of smaller cards. Then each places health tokens on number corresponding hexagons on his character board, usually in range between four and six lives.

Board is spread on the table according to instructions in scenarios, including any additional materials, that are important for a particular story (tokens). Then, players place their heroes on the board and decide order, in which they will alternate during round. There are tokens with number to mark this. 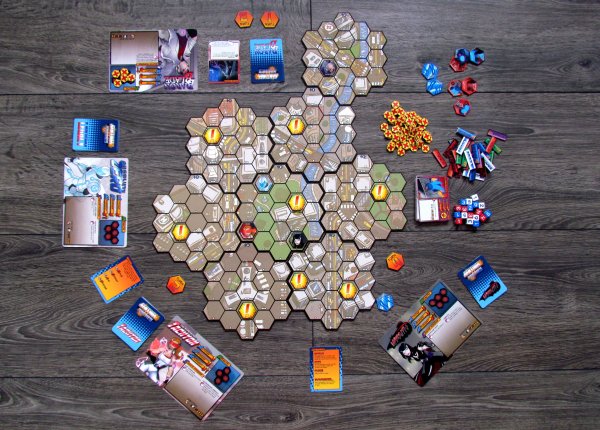 Beginning of each round is a sign of possible change of abilites. Each player can replace his currently used skill for any other card, that belongs to his character. By doing this, he prepares for the next round, which continues by quick character phase (surge), where only effects on cards designed specifically for this part of the round are activated.

Only then, players can finally move on to the action phase. Each character has a certain number of points printed on his card. There are four basic actions, are made of movement and tokens gain, each in two variants. Tokens can be obtained as support for an attack or defense. Movement can also be divided into two options, which can be activated both during one turn. First is classical movement, whose distance is limited only by mobility characteristics of that hero (number on the card). In doing so, player must also take into account elevation, which is worth extra points. In addition, as soon as he enters some dangerous place, he must immediately resolve its event. Second movement is a sprint action, which simply shifts pawn two fields away and ignores changes in terrain height.

In addition to all this, actions can also be used to activate ability either on currently active skill card, or directly on character card. Each skill text starts with different symbols indicating whether it is paid for in form of actions, health, tokens or if its a permanent skill, that does not have to be activated. 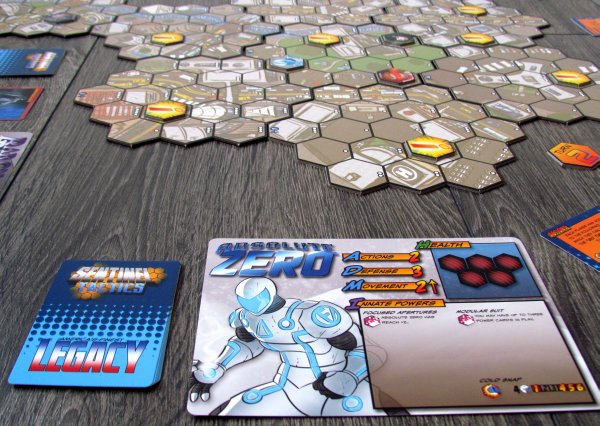 All this will be mostly used to attack enemy. Each skill, that allows player to injure his enemy, is carrying dice code, from which players can easily tell, how many dice will be rolled and what result values should be completely ignored. Beneath this code may still be printed some keywords specifying type of attack.

Only after rolling a predescribed number of dice, visibility has to be checked (for ranged attacks). Rivals see each other only, if there is no higher point in the way. The height of each box is shown by dots at the bottom, so its always easy to keep track of hero situation.

Only such hits, which succeed (numbers allowed by dice code) can cause injury. But opponent and his defensive dice will have something to say to this first. Dice to which defender assigns number greater or at least equal is blocked. Attacks can also be interfered by tokens, that can further add the number of hits or dodges for the defense. 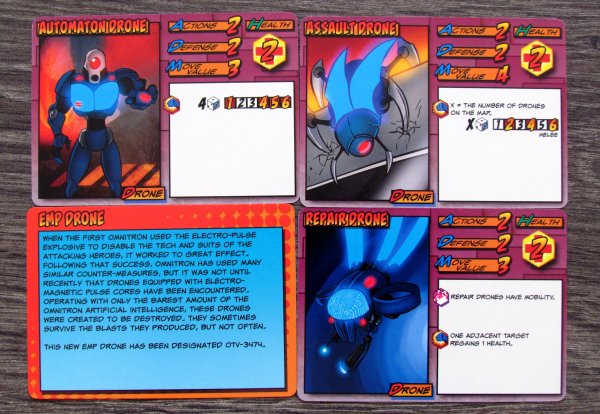 Even environment effects come into play. They add another thing, players have to watch for. Entire battle takes place until either party fails to fulfill its goal. They are specific for particular scenario and does not apply strictly to destruction of the whole group, but must include meeting certain targets or visiting specific places on the board.

Sentinel Tactics resumed, where Multiverse card game started it all. It mostly follows the original play in telling amazing stories, that are each unique and interesting. And this time not in common jacket, which would force players to work together. Newly, there are two opposing warring camps, that have to work among themselves. This creates a brand new experiences on both sides and there is also more room for choice.

Each scenario is designed as a comic book, which looks great, while it also improves the overall experience. In doing so, some characters have their own stories, that are surround by comics. In doing so, of course, everyone has their own specific rules and goals for both sides.

Along with news, each game also brings some disadvantages. According to rules, you should not play with two. Rules always recommended at least four players. Otherwise, players will have to control two characters. But again, it does not have any important influence on experience, although arranging and planning of superhero team is missing.

Each hero in the box is unique. Their combinations create such variability, that each scenario will be different every time, even when you play it again and again. This is very important information, because many games with scenarios have issues with replayability. This problem will not occur here in the foreseeable future.

Additionally, game has a great atmosphere and players feel, that they really are in the game and use their skills. And because it all can huddle on the space of less than an hour of your time, you get this experience in quite a concentrated dose. Directly into a vein and even in any number of players, because authors thought about this. 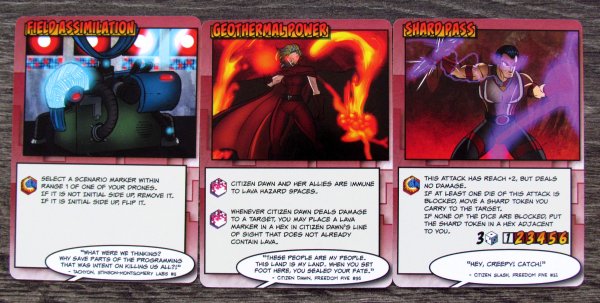 Excellent concept is also height of each tile. City may be changing for each game and distribution of panels is different every time, building up a playground for superheroes. Additionally, visibility interferes with it all. It is also perhaps the only accusation, because you have to get used to determining line of sight of your combatants and its not straightforward.

Simple rules make it a very good even to play with novice and beginners. But all participants must speak English. There is a lot of text on the cards and are a fundamental prerequisite to be able to play Sentinel Tactics.

This game has a huge potential for expansions. More scenarios for existing characters may be created by gaming community itself (great news!), but authors will be adding a number of new villains and heroes, that we already know from the original game. Story itself truly follows direct line, so if you like Sentinels of the Multiverse, then you can open your wallet now. Despite the fact, that this is a competitive game, it still works great! 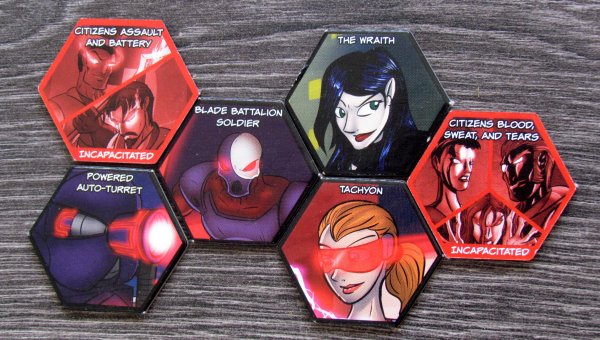 Processing is once again outstanding. We must commend, that this time, we find everything, we need to play inside this box. Terrific comic books and completely illustrated scenarios is place, where the game really comes alive.

Sentinel Tactics is best superhero competitive game. Both sides have a wide range of options, but it all stays simple and fast enough. And while there is a cult around cooperative card game, Sentinel Tactics are still not widely known game. And that is a shame. We should change it together!

- line of sight needs time to get used to

Sentinel Tactics is exactly, what you would expect from the name. Superhero tactical entertainment for two teams, that stand on different sides of the barricade. They are city or jungle apart from each other and enjoy a decent tactical battle between trees or skyscrapers. Players must play and think in teams, and feel like real heroes (villains). Scenarios are interesting themselves, excellently illustrated and in addition different every time you play. Sentinel Tactics is great superhero stuff for all comic book fans .