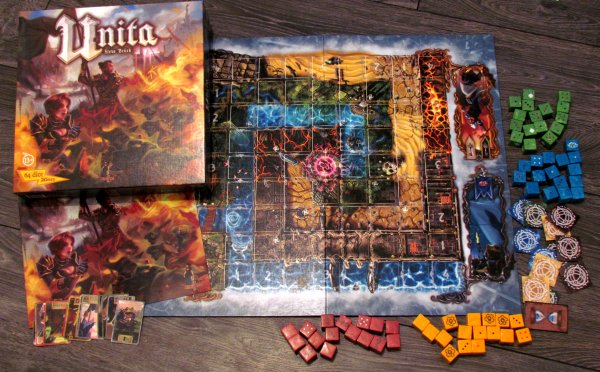 The rebellion was always in our minds. But there was no one to lead us. Until now. We follow heroes, who were not afraid to speak up. People, who suddenly appeared amidst our ranks, began to shout the truth and we listen to them. Their words about freedom and end of the high taxes got deep under our skin. And the revolution has begun.

So here it is. We have a chance to go back into the world of Helvetia and based on the success of Helvetia Cup (review) in our newsroom, we do not hesitate for a second. This time, our whole interest is in board game called Unita. Its author is Steve Brück and illustrations were taken care of by Lorenzo Mastroianni and Ismaël Pommaz. From Switzerland company workshop Helvetia Games, it travelled to the last game fair in Essen Spiel 2014 to find its fans.

In a larger square box with combat scene full of magic, we find four nations. There are people and nuns, but also frogs and royal engineers. Once they were connected in one country, now quarreling for power. They all are represented by 64 large dice, that are clearly dominating whole game. One side is highlighted by red color, showing maximum value dice offers. This number can vary and reach values of from one to five, but there is also a blank side. 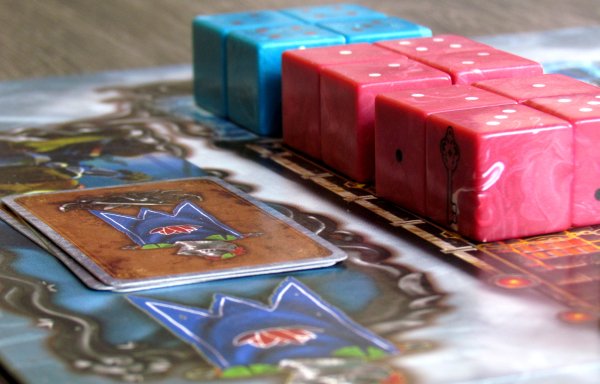 But to get to the dice, players have to fight their way through game board. Its sides correspond to odd and even number of players and show us island lined up in a spiral and divided into many squares (whose size surprisingly correspond to dice). In the middle of both islands is located purple magic gate. There are small portholes on sides, where players can place their cards. It is interesting, that each island actually consists of four (or three) spirals, which gradually whirl into each other until all arrive at the center.

There is twelve cards in the game, divided by three for each race. They are power cards apart image containing effect icons and digit counts of reuses. A dozen pieces of terrain enrich it more, coming in four different colors. Each icon has again its described effects.

At the beginning of the game, players place board in the middle. Each of the players will choose one of the nations and takes all sixteen dice of his race together with tokens corresponding to his element. Each of the generals spreads dice ahead of himself with red value up. Now he sees strength of his army. He takes one dice from each of three highest values (5, 4, 3) and rolls them. According to their results, he places all his three pieces of terrain, where numbers on dice are added together gradually from the middle. 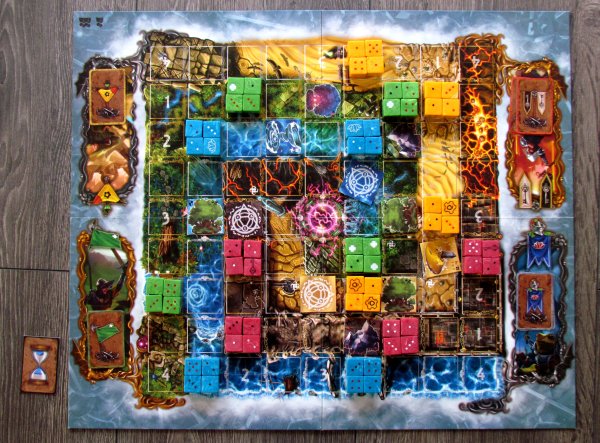 Then all that remains is the most important thing – to create a squad with which players enter the game. Gradually, they alternate in placing two dice and create groups of four dice, that perfectly fill up space of one square on board. Troop deployment happens for four numbered positions. With four dice each, it makes exactly sixteen positions for troops.

Players take turns, where they always have three movement points available. They may freely distribute them among their platoons, but they always have to use all points. Shift to a standard neighbouring area costs one point, only entrance to site with terrain card is more challenging (= two points).

As units moves around board, it will sooner or later meet with another army. Not directly on a single cell (as race tracks do not cross), but in adjacent lanes. At that moment, bloody struggle occurs immediately. Of these eight dice (four on each side) two pairs are always adjacent . Now they compete between themselves by generals comparing their values. The losing dice must be reduced by one. In case of a draw, number on the back dice decides and serves as some kind of backup. 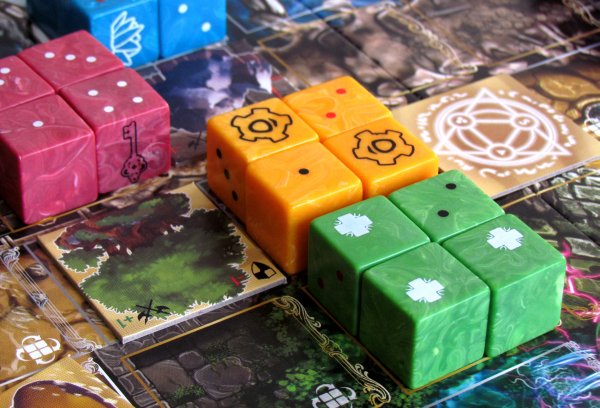 Immediately after the fight, unit formation has to be switched. One pair of dice is swapped for the other and only then can their journey continue on. Individual pieces of terrain provide benefits for the defenders (mountains) or attackers (forest). And then there is always one piece specific to each nation. Their bonuses can always be used only when army stands on them.

This is all about only one thing: to arrive to magical gate in the middle of the board not only as quickly as possible, but especially with fewest injuries. Once that happens, player takes entire set of his dice and moves it in front of him without changing their rank. Game ends after last platoon travels through magical gate. Everyone summs up remaining points on dice and winner is the one, who survived with most points.

Unita is a board game, that you should be careful with. And that in both good and bad sense. It has succeeded at first glance to give impression, that it is a war game, in which players struggle with each other in battles full of tactics. This whole thing is actually true, but behind this theme is actually hiding purely abstract and logical fun. 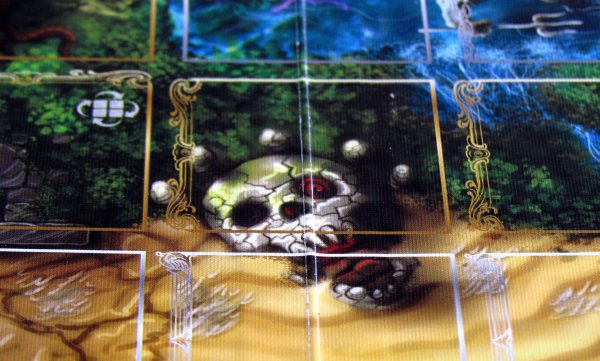 As a result, it is really only just about pushing a group of dice on the board forwards, lowering their strength. When players are trying to avoid conflicts with others, they enjoy benefits of their own nation and calculating everything, so they arrived to the finish in best condition possible. Four units and three movement points each turn ensure sufficient choice and thus control over match development.

Dice themselves are not rolled at all. The only exception is at the beginning, for deployment of terrain. But then you simply rotate them back to highest number, which is a bit unexpected. However dice look very massive and provide good impression, since they are larger than usual.

Players try to avoid conflicts, which is disadvantageous for them and vice versa flock to battles, that seem already won. This creates an interesting impression. Most of the game revolves around open information, so you can really plan ahead. The only exception is only terrains and timing of power cards. 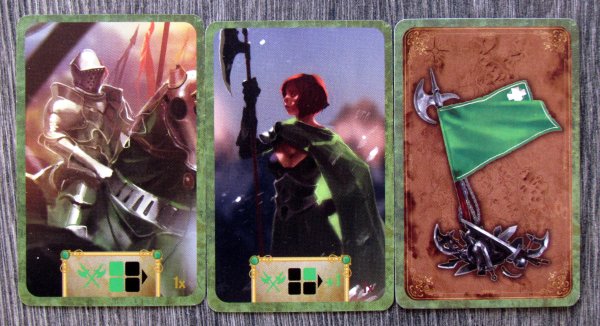 Not everyone may meet on the board. Each player has his own two neighbors and third has to be taken care of by his neighbours. Simultaneously, two neighbors are just right and every move is waiting with calculating of challenging opportunities. But the plan is well designed, all have the same chances and same number of adjacent fields with each other. It looks as very elegant design and main game board is one of the greatest attractions of the game.

Computational complexity associated with gameplay leads to fact, that some players may attempt to delay game a bit, trying to calculate everything. Therefore, it is good to add some hourglass to the game, which assure slight pressure on all the players.

One of the biggest issues regarding Unity is its rulebook. If you learn to play it according to English version, in spite of the simplicity of the game, its not going to be easy. This is obviously a translation from another language, which is very unsuccessful and sometimes its hard to even figure out exactly, what the author was thinking (for example, the word “angle” is used here in the sense of the corner). Some things can be interpreted in two ways. The only luck remains in simplicity of the game and therefore ultimately, you learn to play it properly. 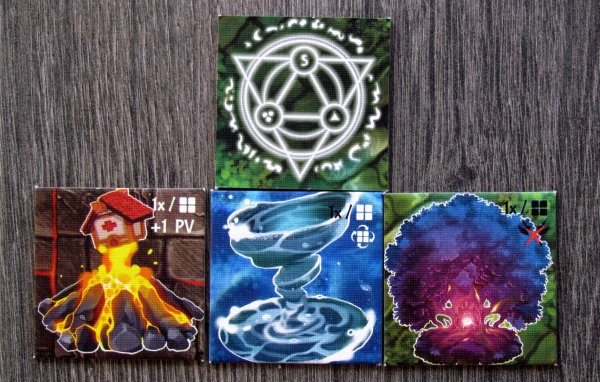 Game time will fit into one hour with all four opponents. The game can be recommended for three or four player battles. Duels then involve all four armies, where each player controls two of them and it is therefore not easy to keep track of all units at once. On the other hand, this is also place, where tactical options offered are vivid, making two player game excellent experience.

Processing of the game is great. Board has beautiful illustrations and looks really great. Dice are massive and large, ensuring that they can be well handled, because you will be switching them constantly back and forth. Perfect overall impression is spoiled only by those rules.

Unita is very nice abstract war game, in which you become a group of dice. It will appeal to all, who love the thought and planning far ahead. That is only way to succeed in this game, because planning turn to turn is not enough. That is, why audience of the game is limited to a narrower circle of players. Unita is a great achievement for fans of abstract games and disappointing for all, who have been waiting some strict war dice game. But this is definitely a good game!

- english rulebook
- only for fans of abstract games

Unita is a game, in which planning and abstraction are associated with a pleasant impression of them and a good experience from the whole match. It is fun for players, who like to think and plan ahead. And they enjoy it thanks to excellent processing and simple rules. Clever manipulation of the dice, fighting with neighbors and swapping battle lines after each battle are very cleverly devised and offers an interesting gameplay. All this is true, but only for fans of abstract games, because everyone else will be probably disappointed. Unita is a game, that can hardly be compared to anything. It has a strong theme, but it also offers dry and thoughtful gameplay without a hint of luck.

by Dušan on 23. 10. 2020
Deep below the ocean are sources of hot water flowing from the earth’s interior through many cracks. These are places, where the human foot has not [...]

by Dušan on 03. 08. 2020
Everyone was afraid of him. They even marched on his castle with lighted torches and tried to drive him out of their region. They did it. When he could not [...]

by Dušan on 26. 06. 2020
I still remember the days, when we respected them. We went to look at their graceful figures with our children, stood quietly among the trees on a meadow [...]
Comments
Leave a reply