For thousands of years the Empire was at war. Mighty armies of the Empire in conjunction with dragons and magicians have won glorious victories but also suffered several defeats. The Empire expanded its borders and soon the worst enemy weren´t savage barbarians from the east, but its own growing size. Soon a civil war began, power struggles between factions, intrigues and countless rebellions.

Tired of endless wars and fights the emperor decided to try a new strategy – to maintain peace through trade. One hundred and seventy years ago, he founded an independent commercial station – Thandar – at the confluence of four major rivers.

Trade flourished and the small trading post soon became one of the most important cities of the Empire, though many argued that to maintain peace with the wild tribes is impossible.

Hero Realms takes you right into the city Thandar, which is now a major metropolis and home to many peoples of different races from all over the known world.

Hero Realms is a card game primarily designed for two players. Do you remember the  globally successful sci-fi game Star Realms? It is from the same designers. The game is set in a fantasy world, where you can meet thieves, warriors, mages, elves, orcs and dragons. Each player gradually formes his package and buys stronger and stronger cards to eliminate his opponent. The game is based on the principle of deckbuilding, i.e. the gradual formation of the package during the game. 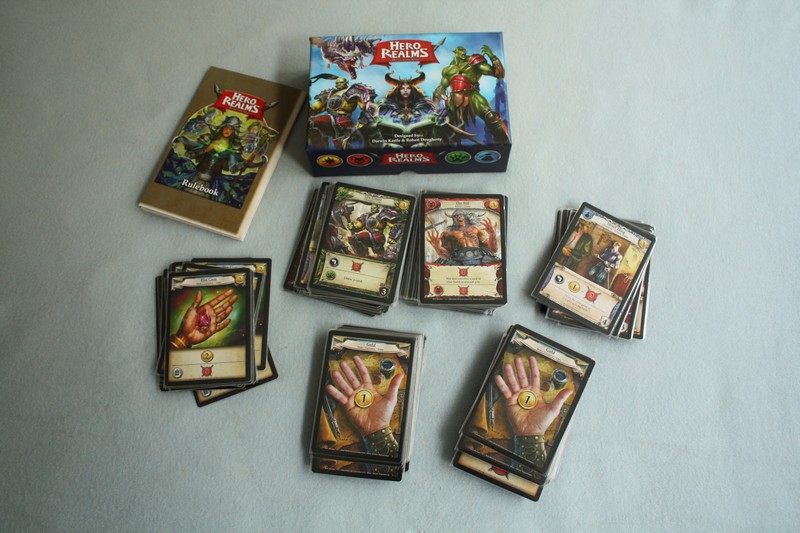 The basic box contains a total of 144 cards, that are sufficient for up to 4 players – each player has their own counter of lives and the basic starting package. Then there are different cards for actions, events, courses and champions, which are divided into four fractions.

Well-organized crime syndicate known as “the Guild“ controls not only trade in Thandar. Guild has its long fingers in everything from petty street theft through bribery and blackmail influential people to murder those whose existence would threaten the profits of her. 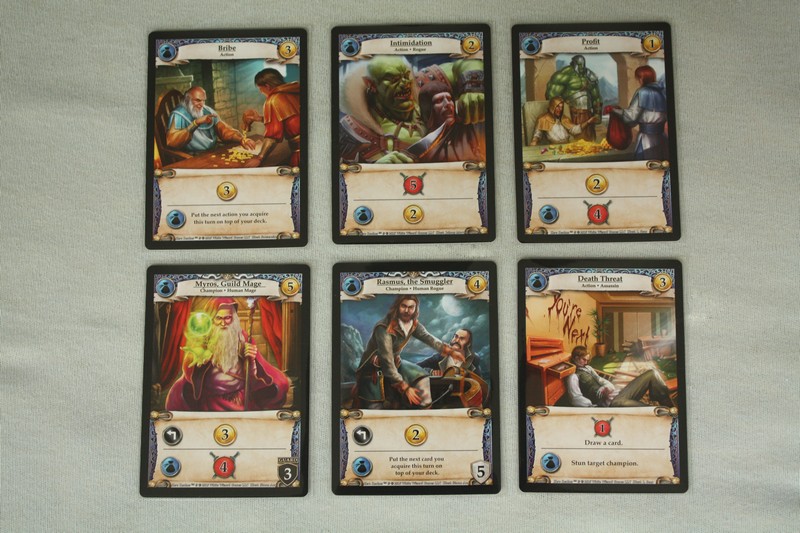 Guild cards give you massive amounts of gold, with their help, you can stun (remove from the game) opponents champion (without a fight) or get a new card on top of your deck, or even directly into the hand.

Necromancers, vampires, dark demon worshipers – the cult of necromancy festers in the hotbed of the city. The homeless and other people keep disappearing because of them. 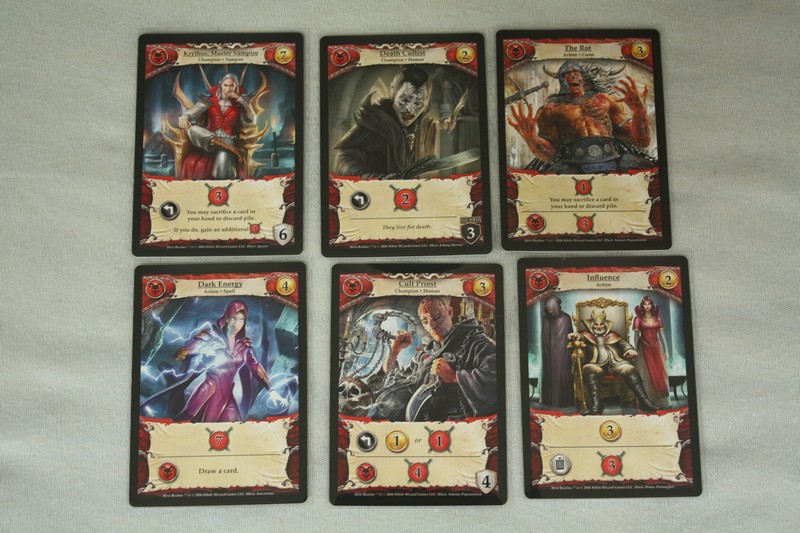 You can use the cards of the necromancer cult to sacrifice the weak cards from your hand or discard pile and become stronger.

Although peace was made with barbarians to the east, the Empire is still clinging to their military traditions. Its highly trained soldiers, magicians and deadly dragons include the best fighting force the world has ever known. 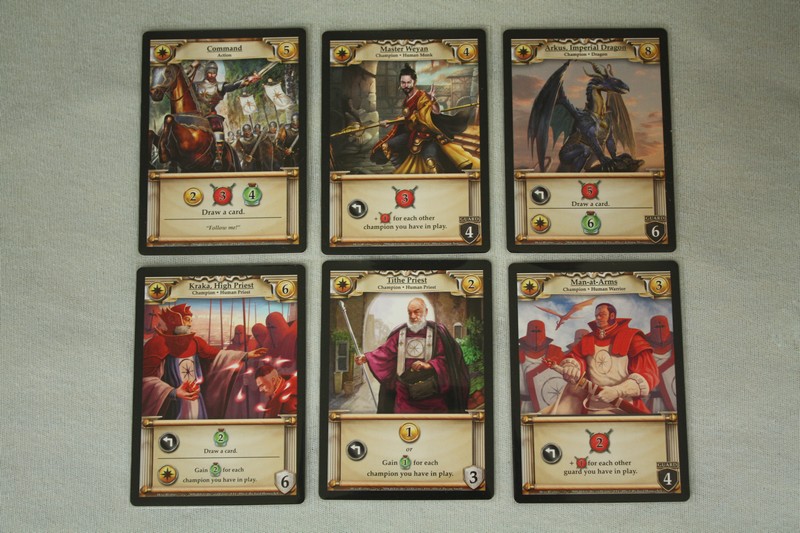 Empire cards will help you to heal and you become stronger the more champions you have in the game.

Green faction of the residents of the wilderness

Residents of wild eastern regions of the Empire – elves older than human history, orc warriors, devastating everything in its surroundings, wild strains of the human  and deadly animal, it’s all there to be found. 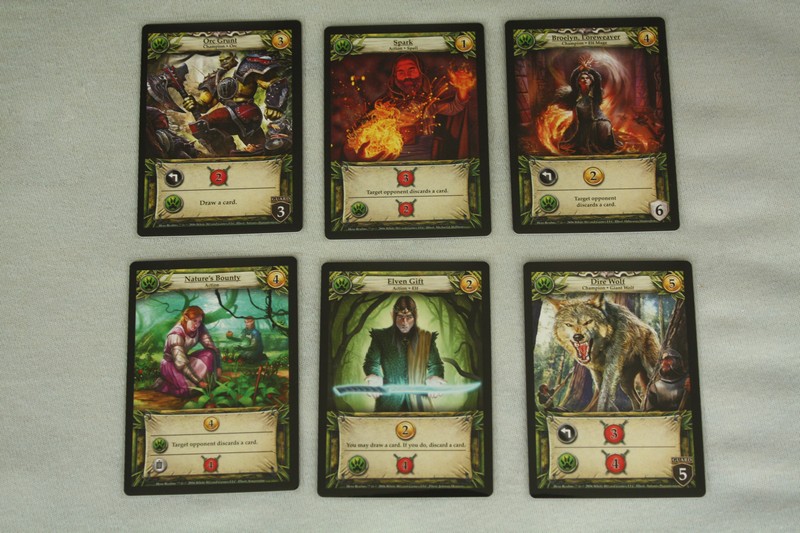 Green wild cards will force your opponent to discard cards, they add a large number of points to your attack and make you roll your deck faster.

Individual cards from the same factions reinforce each other, and when you combine them you unlock a second additional effect, that starts when a player plays in his turn another card of the same faction.

For each turn, a player has 5 cards. Each player starts with a starting package of 10 cards, which has gold and base attacks. The player then buys cards from the marketplace and  improves his package.

Players are taking turns. Each turn consists of three phases – the main phase, discardeding cards and then taking new cards to have 5 in your hand again.

During the main phase player plays a card from his hand. It does not cost any resources – the player simply puts the cards face up on the table in front of him. There are 3 types of cards – objects and actions whose effect is evaluated in a single tournament, and champions representing the powerful warlords who remain in the game to the next round, some of them even protect players from attacks by opponents.

The cards allow two basic actions – attack or buying new cards. Many of them bring also other benefits – for example healing, bringing of additional cards to your hand, forcing opponents to discard a card etc.

Buying cards – there is a marketplace between the players, which always offers 5 card + a pile of cards of red diamonds. The player can buy cards from the marketplace with his coins and improve his package.

Attacks are the most important thing in the game, because thanks to it you can destroy your opponent and slaughter his champions. The player whose health drops to 0, immediately loses the game.

In the discard phase the player discards all the cards (even those which he did not use) except champions into the discard pile and takes 5 new cards in his hand. If you run out of cards to teasing, shuffle the discard pile.

Your goal is to buy and combine cards so that together they are most effective to enable you to get rid of the weak cards, cure, but also to gather enough power to destroy your opponent.

There are different tactics you can use, but it is always important to reflect on the current situation and modify it eg., depending on what cards are now on the market, or which cards your opponent bought. It is important to realize that in an opponent’s round you can´t play any cards, so if you have not prepared your champion to protect you, opponents dragon may end you. Marketplace brings into play the element of chance, i.e. not playing with pre-engineered packages, but you have to continually shape of what is available. 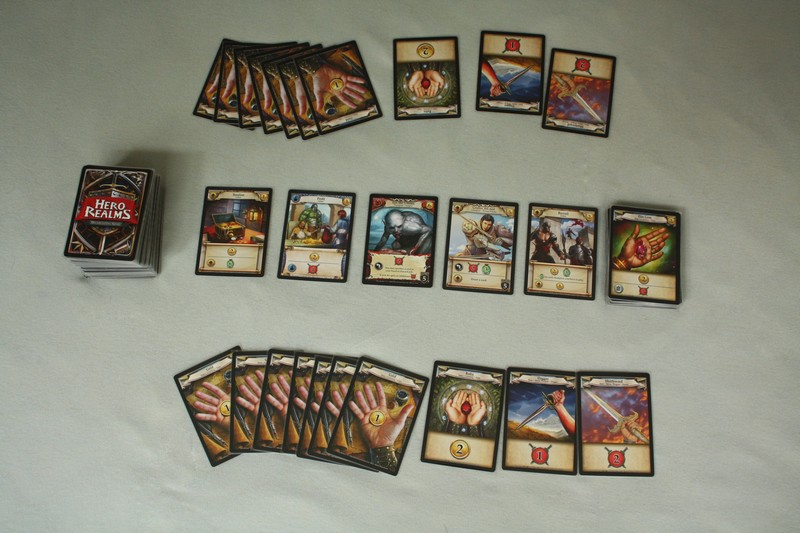 The game is intended primarily for two players, but there is described a further variant for 3-6 players. You can play all against all, or create teams fighting each other. When you want to play 6 people, basic boxes are not enough and you need either one more set, or 2 expansion packs characters.

The game was released this fall after a successful funding on the Kickstarter. There are already available expansion packs for each character – Cleric, Rogue, Warrior, Mage, Archer – they bring an unique starting packages and new features. Further expansion is planned to allow a cooperative campaign play, which is due out next year.

Hero Realms is based on game mechanics of her older sister – Star Realms, which takes place in space in the distant future. The game system is virtually the same, they differ only in details. In the SR there are fortresses, in HR champions. In HR there are cards that allow you to prepare your champion again, so you can take advantage of their effect several times per round. Furthermore, I think the HR cards are stronger and the game is faster. The cards in the basic HR box are for up to 4 players, but it is more expensive than SR. We can say that between the two games you can choose, depending on whether you are closer to the magical world of fantasy or interstellar space. 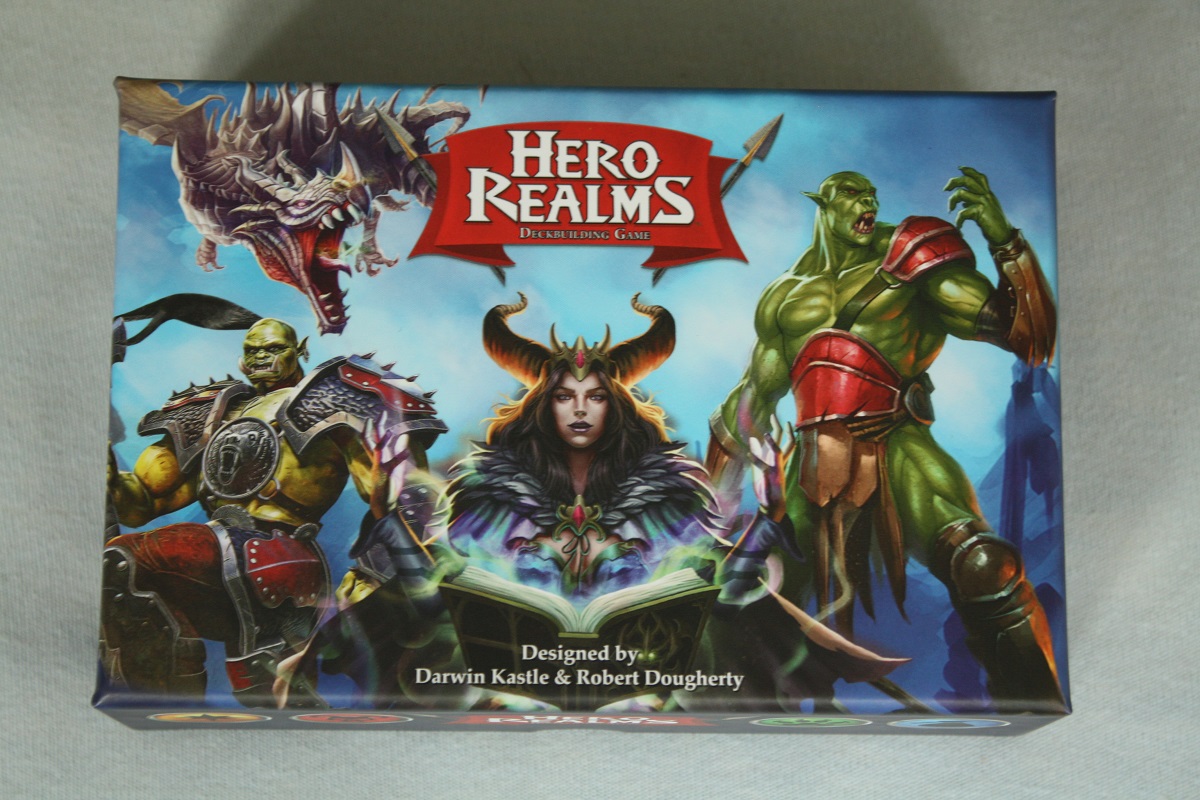 Review: Hero Realms – arise mighty heroes!
It is a fast game with simple rules that are easy to explain, and you can start. You stick it in your pocket and it can be played almost anywhere. Despite the simplicity of the rules of the game it allows different game strategies – you must respond to the current offer and to what your opponent just bought. Sometimes you would even buy a card that you don´t really need but you know that will make your opponent stronger. The game is well balanced and when you finish playing it, you'll want to play again.

Klady:
+ Simple rules, easy rules that can be explained quickly
+ Short playing time
+ little text on the cards and simple English
+ Graphics
+ Simple gameplay mechanics, which on the other hand bring plenty of tactical options
Zápory:
- An element of randomness in what cards are available
4.5

Recenze: The Key Murder at the Oakdale Club