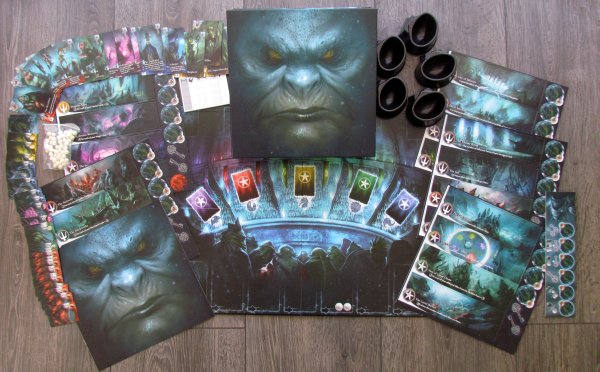 As we all know, we have the same fate. Or at least this is, what our parents drummed into our heads, as well as siblings and random passers-by. We have been selected as next rulers of the depths. But they forgot to tell us, that there is more of us. With a sense of uniqueness, we came to the royal court to find out, that there is still a long way to go, before crown will finally find its master.

Imagine that. But actually you do not have to. You are also born for success and you get into same situation, if you open box with title Abyss. Author of this news for 2014 are Bruno Cathala and Charles Chevallier. Their work became unique also because of the illustrations by Xavier Collette, who added a truly unique look to the game. Not surprisingly, it was published then by Asmodée company.

Thus you cannot easily tell, what game is inside the box. Front of the box is dominated by only one frowning face, that looks much like a dour expression of Caesar from new Planet of the Apes. But this is no monkey, we are under water here. And once you delve beneath the lid, unprecedented creation surrounds you as well. 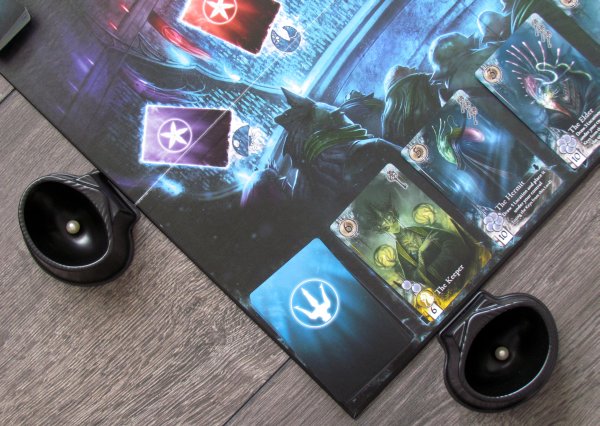 Marine colors decorate great game board, bearing three areas – council meeting with five positions, exploration track and tribunal. Cardboard components are occupied in greatest proportions by locations – elongated pieces with textual instructions and one plate to show actual threat. Much smaller tokens are keys and twenty monsters. Residue is formed by cards – exploration (smaller 71 pieces) and lord cards (35 larger). Packaging is finished with round pearls safely hidden inside plastic bowls and one notebook for scoring.

At the beginning of every game, game board is placed and cards are distributed on it. Tribunal receives six random lords to start with. Rest of these kind create supply, as well as exploration cards, which are shuffled and placed next to the exploration track. Next to the board, players randomly reveal one location (rest remains face down), together with threat board (marker is placed on upper position), supply of monsters and keys. Each player gets one cup and they can place one pearl in it. Rest of shiny objects creates an undersea treasure of the whole nation.

Players in their turn have one major obligation and that is to take an activity. There are three actions to choose from, among which the most important is exploration of depths. Players will use smaller cards from the deck, sequentially drawing one of them at a time. If its not a monster, each revealed card must be first offered to other players to buy. They will pay its cost to active player. Only in the event, that no one else wants it, active player can get it for free or play it on an exploration route. 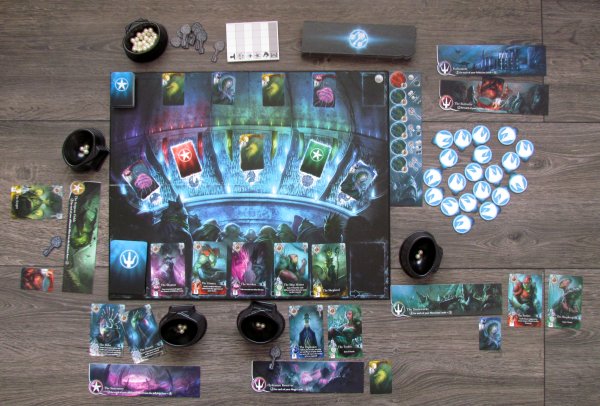 While first choice ends his move immediately, you could say, that with the other, it only begins. Player can gradually reveal next cards and price of purchase is increasing. If player manages to fill the full range, he adds that card as an ally and obtains reward from the bank. But among allies of five races, there are also six monsters located somewhere and player has to fight them.

Here comes another important choice – player can avoid monster and thus increase reward for the next fight. Or he can fight it and get a pearl or a random key token creatures distributed next to the board. Reward only depends on the position of the threat pointer, that is advanced precisely because of avoiding fights. Exploration ends with battle and all cards revealed are moved to council meeting space.

Council is place, where player can take cards as second choice in his turn, instead of exploration. This is done completely for free. Or it is also possible to spend accumulated race cards and buy them some Lord from tribunal, where price is specified in particular race, which is needed to be used for such recruitment. By hiring such a character, player gains number of influence points and also some skill. One race card played as a price can be kept as a help (the one with the lowest value) to and bring points at the end of the game. 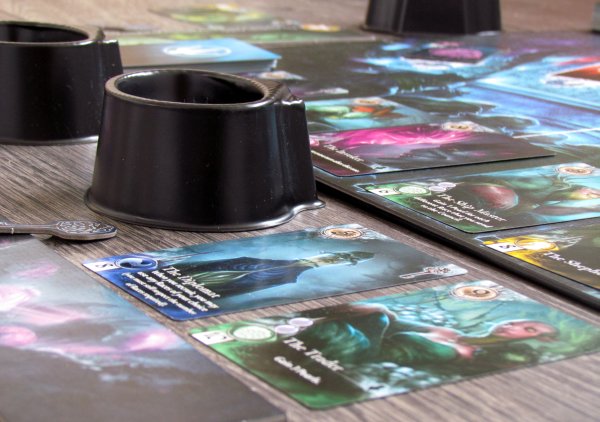 Players have passed through major part of one round. But even that all is preceded by option to pay one pearl and add new Lord to tribunal. This is one of few moments, when new ones are added. A very important is also ending of turns, although it is not (just like aforementioned machinations with tribunal) compulsory and represents a chance to capture one location from the menu.

Underwater places bring important points of influence to players. And as you might have already guessed, this is what eventually is the most important thing. Game ends, when one of the parties hires seventh lord or as soon as the supply of these respectable gentlemen runs out. All competitors will evaluate their accumulated locations, lords, lined companions and captured monsters. Whoever has the most influence points is the winner of the game.

Abyss is a game, that has taken whole gaming community as a marketing tool. There appeared five different looking boxes, but  their content is no different, and it is only an aesthetic issue, which aroused negative reaction for many fans. This game is a nightmare for all collectors, but graphic concept without any inscriptions on box itself (front) differentiates it from the competition. 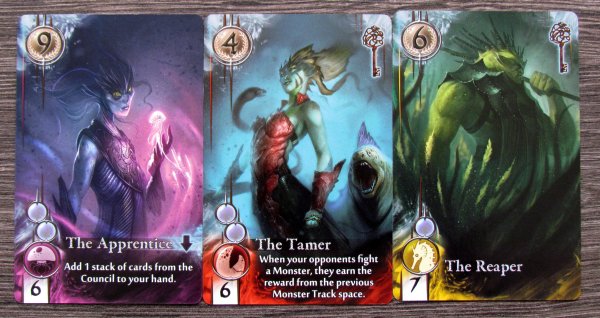 But once you get into the interior, you will encounter next surprise the author has prepared for us. According to the components and overall impression, you might expect a little bit different game, than you get in the end. It is a grand theme, although drawn down under water level. We find exploration, fighting, but no dice. Battle with the monster is an automatical success, if you do it. Water nations simply have, what it takes to defend their home.

And so in the end everything revolves around collecting sets of cards, which are required to hire Lords. And they are then turned into points for the route. But also to certain advantages over others. Centerpiece of it all is exploration, where players reveal cards, but others can buy them first. For everyone involved, hard decisions are located right here, because money spent do not go to the bank, but into pocket of active player.

Another example of selections are monsters. Players can avoid meeting with them, raise the level of threat and therefore look forward to higher reward. But nobody can guarantee them, they will be the one, who gets this reward. It is not easy to evaluate everything, so it plays into your hands. Lords offer very interesting skills, that seem really strong, but they are balanced. And because all this, games are exciting and balanced as well. 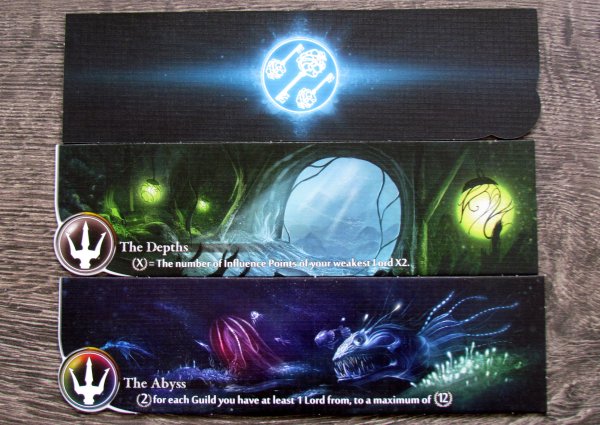 Big advantage of the whole game is fact, that every turn partially involves all the players. At least in the case, that exploration is selected as action (which is typical). Players are constantly pushing their luck and must evaluate, whether continuation of exploration is worth the risk. Finally, they can get allies, who they did not want.

Biggest drawback of the game is its slow start at the beginning. Lords prices are high and it takes time for players to go through a series of explorations and save for it. And for that part of thime, duel is slower, but players can always look forward to next round, when everything gets going and begins to flow much better.

Actual game mechanics are pleasantly free and simple, so there is no problem to learn it to anyone. Much more difficult is to win. Especially against experienced opponents. But even so, there is no problem, that game Abyss is attended also by less experienced players. Why? Because everything revolves around only three actions to choose from, which can be handled even by novice players. An important advantage is also short playing time (half an hour, but rather an hour with more players), that makes the game also support previously mentioned target group. Game runs smoothly in all the numbers, though, thanks to the mechanics of exploration, it is most interestiing with full number of four. 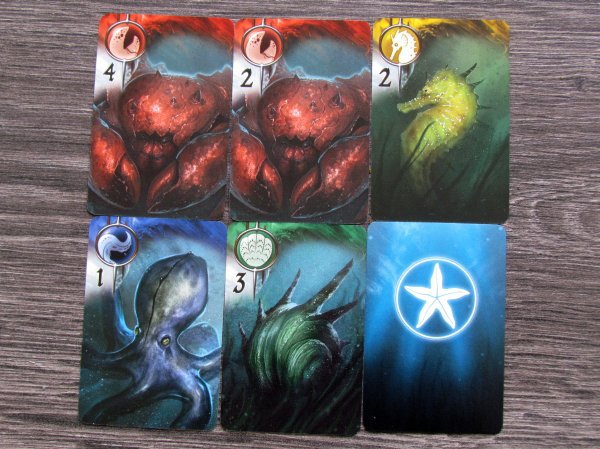 So far, we have not emphasized enough, that game is really beautiful. From looking at the box over cards to each smaller boards, everything looks perfect. All illustrations are stunning and overall impression is enhanced even by pearls. This game has a look, that will take your breath away.

Abyss will probably not break any rankings or receive any awards, but it does not matter. It can entertain enough to convince you, that it is box worth buying. And this is something, that can boast it into being a truly exceptional game. This game does everything well, and although it is a little different than you would expect and theme is here just for show, Abyss is truly fun to play.

Abyss is for players, who like to collect sets of cards and try their luck. It is here, where the difference will break between fans and players, who like and dislike Abyss. Mechanism of exploration, which runs across whole main game, is using the principle of tempting your own luck. As players reveal another card, they are offering it for others to buy. The game is filled with decisions (that are not so difficult) and every turn involves all players to some degree. Because no one needs to just sit back and watch others play. Game is highly variable due to large supply of cards. Abyss is absolutely exceptional with its processing. Who would not want to own one of the most beautiful of games, which saw light of day? And especially, when it still plays very well.