Review: Holiday Fluxx – Christmas can be a real chaos! 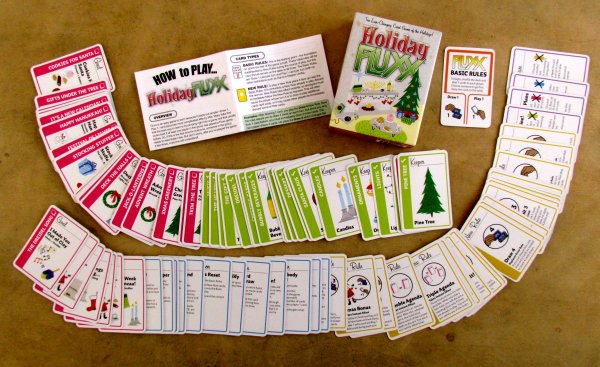 Whole dinner, I thought I glued the christmas signs correctly. But the more opening presents approached, the greater was my uncertainty. And my suspicions was confirmed, when I glanced discreetly under the tree. Now it’s too late to do anything about it. I will have to pretend, that it’s okay. Perhaps no one would suspect anything bad, when grandpa and grandma get tennis rackets.

Yes, we in Europe have been handing out gifts on Christmas Eve, before Santa Claus brings them to whole other world. This time, we were ourselves given also a surprise. Namely, that generous gentleman is not the one with a large belldy – he is called Andrew Looney and makes Christmas last whole year. Thanks to Holiday Fluxx card game, which was published already in 2014 with illustrations by Ali Douglass.

This package is definitely small. This is a box, which simply holds together two decks of cards. Indeed, just as all other Fluxxian games. It is easy to follow in their footsteps and (with the exception of festive picture), get inside. There are folding rules and above all: a hundred cards. 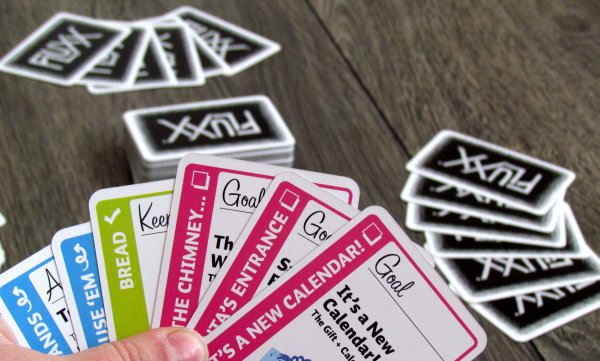 They all are very easy to distinguish by color. There are rule cards, objectives and also keepers and creepers. It all rounded down by action cards with blue stripes. Each of them has created a tangle of rules to bring havoc and chaos. This is their clear destiny.

If you know Fluxx game, then you probably will not be surprised by the previous sentence. Hopefully, however, that did not intimidate even the less experienced. Everything about Fluxx is in fact chaotic, but still maintaining the fun. Players begin each game with simple rules given on a card in the middle. They have several cards in hand and there is only one card on the table describing the starting rules: draw 1, play 1.

And this rule is everything, players needst to stick to. At the beginning of his turn, player receives one new card from drawing pile, and then he can play any card from his hand. But this statement is true at first and can be altered by several different events. Cards have different usage: they can be placed in front of one of the players to keep. With their help, he can achieve the current goal card showing several images together. And this goal card can also be played from hand and overlap existing goal card. 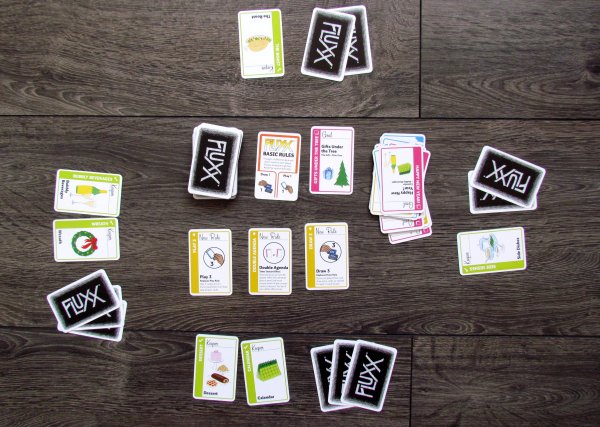 New rules are added to existing ones, in case they do not contradict current cards, which are then replaced. Soon, players will be drawing (or playing) more cards, have to watch their card number (in the hand or on the table) and many other conditions. And they all are supported by more action cards, that allow their owners to affect other players. Game is constantly overflowing and lasts until one player is owner of both images required by the current goal card. This player immediately becomes the winner.

So. Again, we have rehearsed simple rules of Fluxx. You might know from our previous reviews of this game iterations, that we have a certain affection for this game. And what does this new version do differently? What news does it bring? Thus, first of all, the real novelty is the theme. Once again, therefore, we have a surprise card (new violet stripe), which can be played as a response to other action and thus out of your move.

Much more interesting, however, are cards, that are directly related to Christmas. Thanksgiving is a goal, that is special by offering a choice of five images. Players then simply need to be owning three of them to become an instant winner. But the festive mood does not spare even the rule cards, where we find Christmas bonus (if you own Santa, you get an extra card) or opening gifts. Enough to make anyone want to have lined gift card (then, this rule is active). 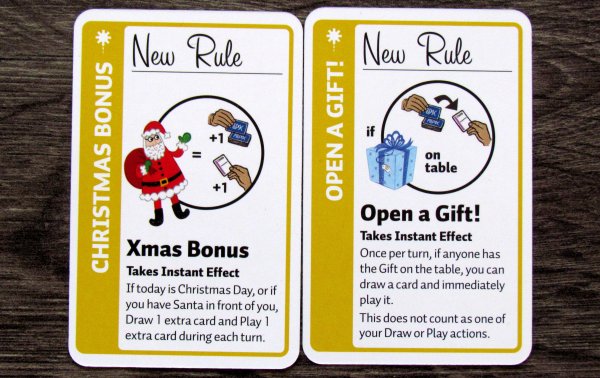 This rule is voluntary and players are not forced to follow it. Unlike other rules in Fluxx. At the same time, this option can be quite risky, because it often leads to unexpected effects and increases the already significant chaos in the game. Virtually everything is guided by luck, without whose favor, player simply cannot lust for victory.

But we encountered also other interesting rules. Specifically, we are referring to possibility of using play number for drawing new cards (Swap Plays for Draws) and especially mission mill. This rule has become very popular with us at the table and slightly reduces effect of chance. It allows players to clean their hands of goal cards (it often happens, that you do not hold anything but goals in your hand) and draw same number of cards from the deck. It continues with Regifting card, which allows you to move any of your own keepers to other players.

Holiday Fluxx is a card game, that brings not only new images in an old jacket. It adds new cards to the mix and it is working to keep the attention of even already experienced fluxxers. And that’s why we find Holiday Fluxx a really happy and very pleasant Christmas surprise.

Holiday Fluxx is guaranteed fun, if you do not mind random and crazy progress of a game. New version offers a Christmas theme, new images and a pile of new rule cards. They bring nothing radically new, but game still remains fun and it is easy going the way of evolution. An example is mill card, that allows players to replace unusable goal cards for new cards from the deck. Overall Holiday Fluxx is a good move and a new fun addition to the family Fluxx games.