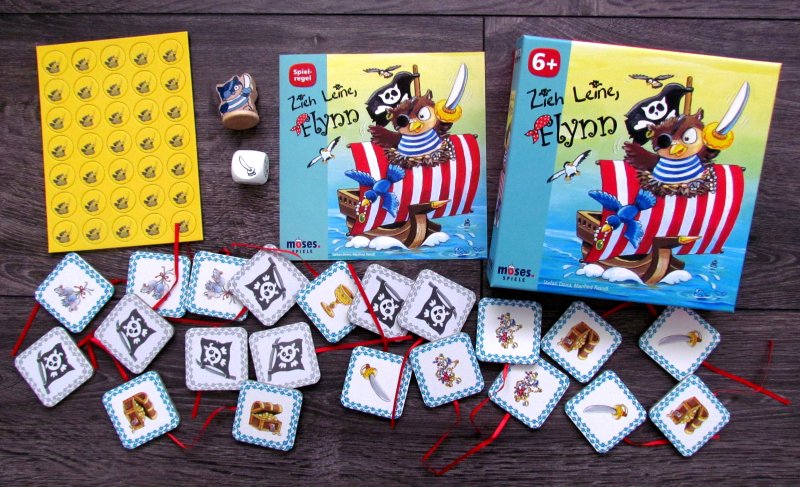 Flynn the owl is well-known and feared pirate. He has a patch over one eye, but he still sees and hears very well. All the animals from neighborhood are afraid of him. You may have heard that owls sleep during the day. And if Flynn really hates something, it is when someone wakes him up in the middle of the day. Children are unable to play near and fear him. But fortunately for kids, there is one rascal called Greg among them, who loves adventure.

Every day this rascal is organizing an expedition to Flynn’s home. And we join him on one such adventure. Just today, owl settled its nest on a large pile of objects. And this is them main theme of what is going on in boardgame Zieh Leine, Flynn. This is a board game from minds of Stefan Dorra and Manfred Reindl and published under flag of Moses Spiele.

Square box is at first glance reigned by owl Flynn, who is sailing toward entertainment, surrounded by several birds. And we can and will be boarded have a chance to open this hard cardboard box. It will be easier, because of the openings in the lid, enabling us to quickly lift it and get to the rules. This booklet covers all other content. 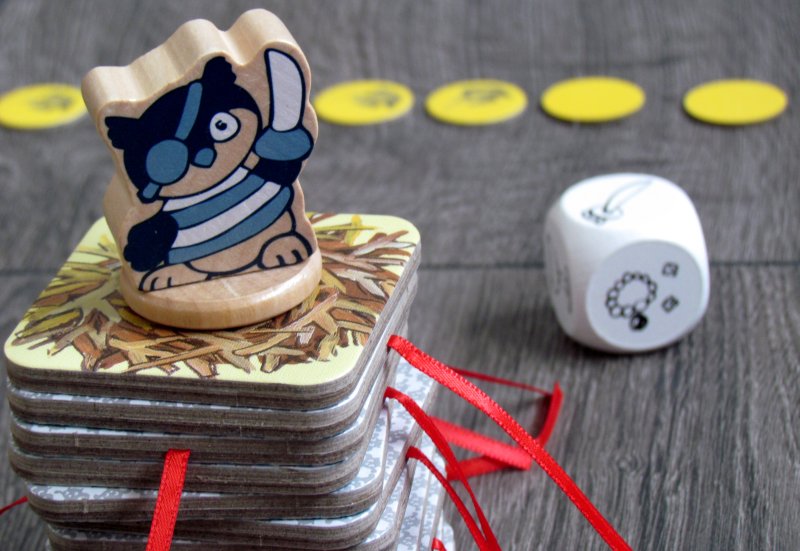 Fortunately there is enough space for everything down below. There are twenty tiles waiting for us, which themselves have always an item on one side and Jolly Roger on the other. But these pieces are interesting in something else, than their large size and thickness. Each has one cloth ribbon hanging from it, which acts as such a tail. In addition to these major parts, there are also tokens of gold, one block, one nest tile and wooden figurine of owl.

At the beginning of the game players split tiles according to figures on the pile and put them one on the other into one high pyramid. On the top is placed tile with owl’s nest and on it will comfortably sit Flynn the Owl. Each player then gets seven coins out of stock and turns them facing with Flynn’s illustration up. Dice and rest of coins are set aside for now.

Now is the time, when first of participants rolls dice and finds out, what picture is shown on the upper side. Except owl portrait, all other match some item printed on tiles, but they are now nicely stacked on each other. What should the player do? He has to estimate well and pull tile from the pile nicely, holding it only by the cord. 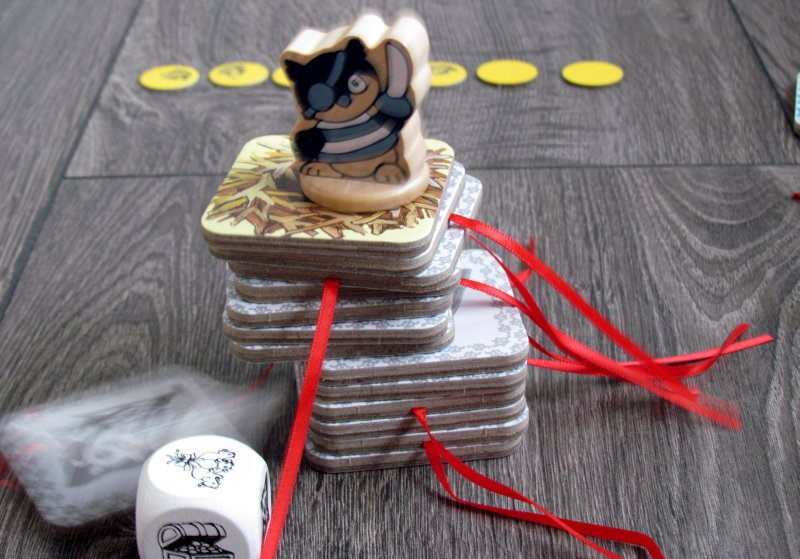 This has everything to do with being gentle, because apart from a mistake of taking another tile, he can not afford to let either pyramid or Flynn himself fall! Only if they manage to seamlessly pull the right piece, whose symbol was rolled on a die, they can flip one of their gold coins as a reward.Fortunately, most of the errors do not indicate a major problem, only end of turn without any success. But falling of the tower becomes player’s failure and wipes all his accomplishments: his acquired coins are rotated back to their original side.

All pieces pulled are heading straight to tile storage. Players divide them according to their pictures, so everyone can easily tell, how many tiles of that type remains in the pyramid. Once a type of tiles is pulled out completely, players can return it to the top of the pyramid, beneath the owl’s nest. Players are struggling with their memory, estimating and cleverly pulling tiles until the moment, when one of them manages to turn over all seven gold coins. This player immediately becomes winner of the game.

Zieh Leine, Flynn is a game, that combines emotion of inherent skill games with other important elements. Most important is proper attention to detail. All competitors must be able to correctly guess, where a group begins and ends. From beginning of a game, they also have to remember order, in which they all symbols are stored in the tower. 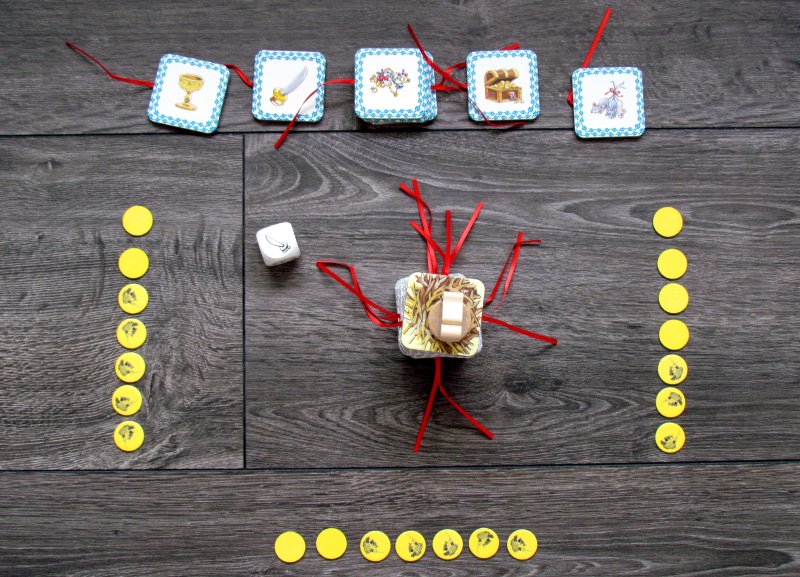 It all together makes for an excellent entertainment for children. Main element of the gameplay are pieces with strings. Because of them, all the pulling is possible. And it has also results in the fun of the whole principle, that stands in your way to victory – falling.

And here also comes finesse into play. Owl or tower shall not fall under any circumstances. This is made easier thanks to aforementioned strings, but even so, pyramid has constantly tend to lean and disobey your commands.

Another important element is returning of tiles into the game. This situation nicely mixes up your head and you soon become lost. Situation at the end of the game becomes harder and harder until some players lose track and they will pull out simply at random fashion.That is main shortcoming of the game, which you can encounter. Luck is main ingredient. However, if you pay attention, then it is possible most of the time to at least be aware, which symbol is located where. 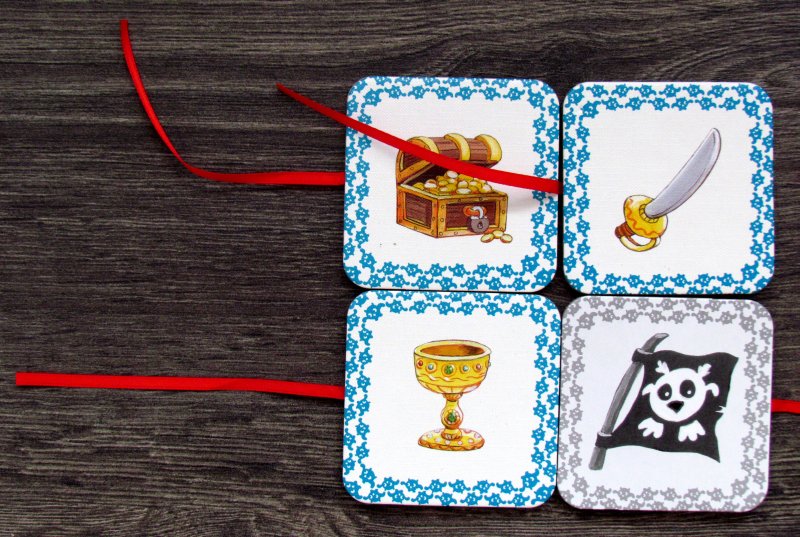 Length of the game, of course, depends a bit on ability and skill of the players, because all efforts may come to naught with one mistake. Returning them back to the start. Game is fast-paced, so number of players has no effect. Opponents have no chance to attack each other, which you could be missing a bit. But age is not so important variable, because rules also contain advanced variant.

Zieh Leine, Flynn is a simple children’s game, that matches its theme and intensity to its target group. Age of six is, where they can already have fun, but luckily game still poses a challenge for older kids and even parents. Only overall course of the game speeds up, when playing with older gamers. Zieh Leine, Flynn is nice and fun game for kids.