by Dušan on 09. 11. 2015
0
previous article
Review: Diego Drachenzahn - teeth are not everything dragons have
next article
Review: Machi Koro - city budget into your own pockets 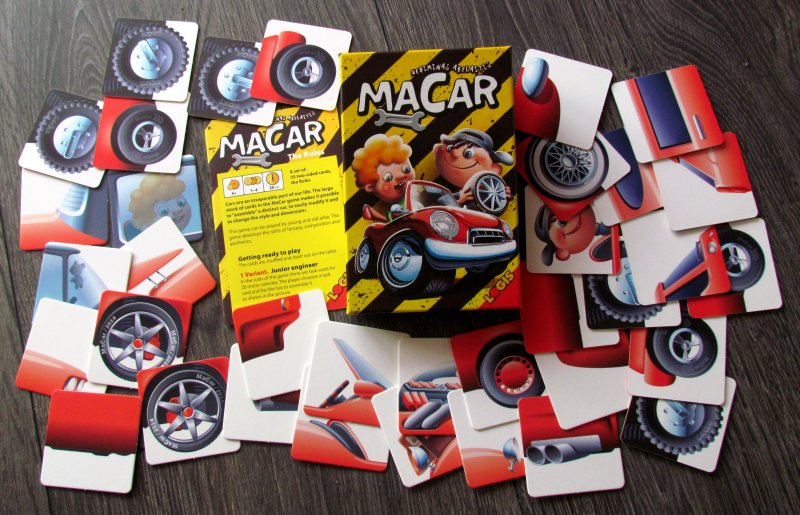 Wheel to wheel, fine tuning front bumper and seat up the engine in the rear. And suddenly we have a little car, that looks like a BMW. But what do I hear? You say you want an Audi? Not a problem. Just a little stretch, filling in and we see some A6.

Children do not tell apart different types of cars as well, but they love to create crazy riding creations. And with them will they also be able to play in card game MaCar. It was sent to us for review from Lithuania, in particular from the company Logis (Find a Friend). Author of this new box is Gediminas Akelaitis and same name is also written under illustrations.

Small spindly box is decorated with a yellow and black stripes that should resemble speed. On the lid is a pair of children, which is building their own car. Illustrations indicate precisely what awaits us inside. Thus, when we later come to all those cardboard tiles (36 double-sided pieces), we are already exprecting them. Each contains only a piece of car, whether it’s a body, light or driver alone. 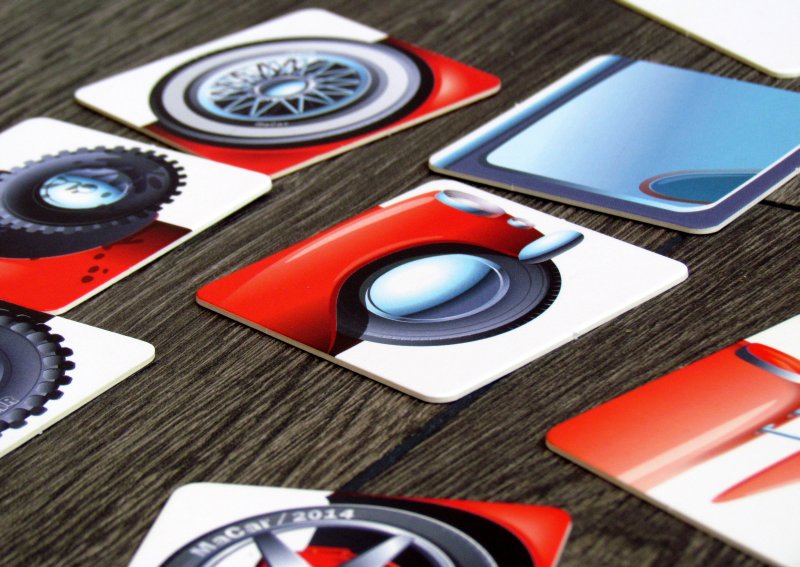 And all secrets of the game are revealed by the rules, that are very short. We have got a really simple game in front of us. At the start of every game, players together spread all pieces on the table, divide into two teams and prepare for battle.

After that, their mission in every round will be only to build largest car. But this would probably not be enough to keep the game interesting, what do you think? Any of the teams can finish construction and get points for finished car. Each round two points are dealt – first for finishing the round first (with a completed vehicle) and second for largest creation, that does not need to be complete.

Players must have a very good timing to call it a round and still try to get two points in one round. Now, they can do it in course of several rounds, which are played always until one of the opponents announces end. It seems simple, but it is not. Many rounds will end in a draw with one point for each side. But after more rounds, game usually ends with victory of one party. In case of equality, it is possible to continue as sudden death. 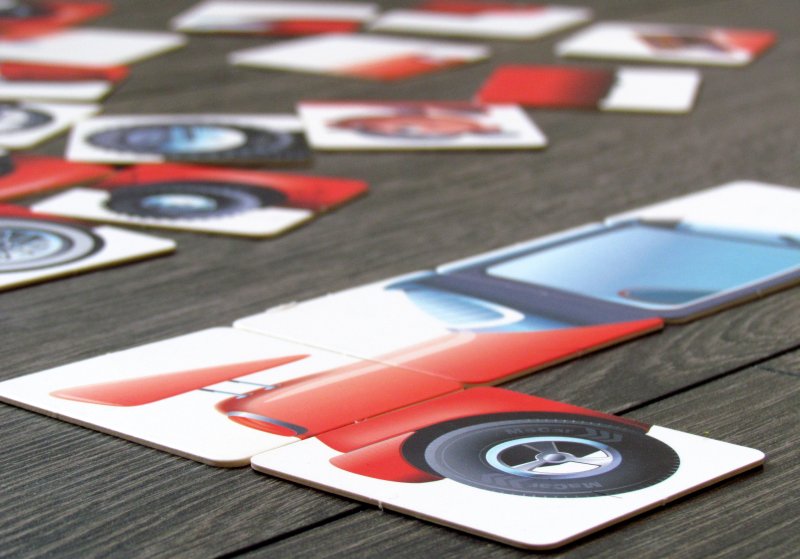 MaCar game has completely missed its target. While trying to ease gameplay, author went too far and gutted all the points, that could make the game interesting. Although fighting for the fastest team remains and its disrupted by efforts to simultaneously have the biggest car, but result is not such good fun as it could have been. And even for children.

Those will appreciate very much opportunity to compose pieces and tiles to form their own crazy cars. Images are really versatile and more pictures from each type indicate options. Illustrations in the rulebook are not just random examples. They represent tasks for the very smallest players four years up. These small children can simply try to build a car according to the assignment.

And yet in the end, team competition is exciting at least in the effort to find right timing, when to end the round. These moments are really tense, but the game just is not working as a whole. At least from the perspective of older players. Children, at least in the early parts, will appreciate the ability to create different sized cars, compete in their abilities and try to beat each other. Battles are reasonably long and lasts between fifteen and twenty minutes. Time can also be adjusted with target number of points.

Building cars out of carton just using your imagination could be fun, but children will grow out of it already, when they turn five. Suddenly, they want to play, compete and expecting something more during the game. At least a little fun can be seen, when playing in teams. But most focus of this game is truly on the very smallest children. This is where it could hit its mark, at least for a short amount of time. Graphics are well done and puzzle element works.

MaCar eventually remains children game and nothing more. Unfortunately, whole game is nothing exceptional, although it will be played by the very youngest players. But as time goes by, you will find, that it is not much fun for them either. We all looked forward to building cars as so did children, but eventually they will enjoy it only for few games.

+ suspenseful end of each round
+ creating cars
+ nice graphics, which connects to each other

by Dušan on 25. 01. 2017
Where can you hide, when chased by a dragon? It can dig anything hidden in the ground and climb trees with its claws.

by Dušan on 04. 01. 2016
What could be better, than having a slide directly behind your small house? Waterslide, where you whoosh down into the soft? That is entertainment, that [...]

by Dušan on 26. 08. 2015
Razors growl, nylon rustles and reels are going at full speed. A competition for the best catch in the pond has just started. But fishermen are not [...]
Comments
Leave a reply