by Dušan on 20. 11. 2015
0
previous article
PREVIEW: Ashes – Rise of the Phoenixborn
next article
Review: MammuZ – attack of extinct species
Contents 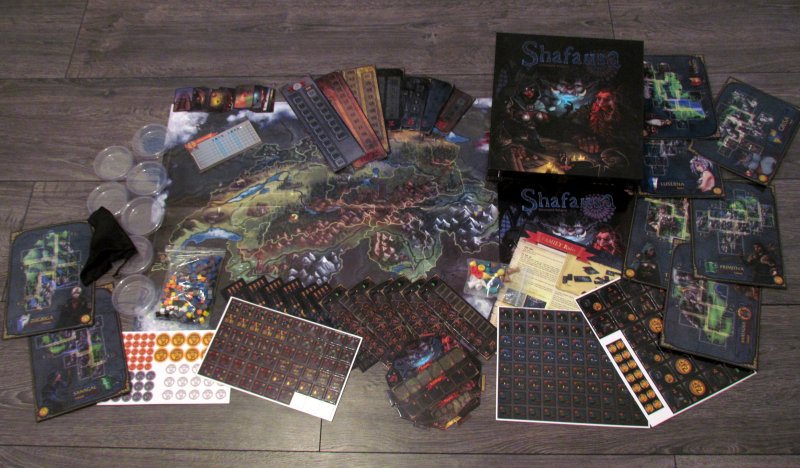 It seems, that it all happened at once. From the quiet and green world, we suddenly have become mine nation. Never before were people interested in wealth under the ground, but at some point valuable and shiny metals became their main attraction. A mad rush began with the dwarves, but quickly spread across our country and earth is getting wrinkled under the weight of mining machines. First forests were chopped down within days, now showing only pits leading to the underground. And it seems, that everyone likes it that way. Am I the only one to resist? I have to take over this shiny business.

Shafausa game tells story of the conflict, which originated in the world of Helvetia and which we can participate in. Creator of the game is Christophe Borgeat and illustrations were created under hand and brush by Lorenzo Mastroianni. It is already third member of games set in Helvetia world, created by Helvetia Games company. This one was released in 2012 along with Helvetia Cup.

Inside a dark box (with fantasy illustration, that will get you interested) is really enough stuff to get you going. It all starts by common board in seven-sided shape, which will connect to seven rays – more rectangular plates of sources. Next in line are mining boards and even bigger ones for individual players, representing race and simultaneously territories divided into squares. 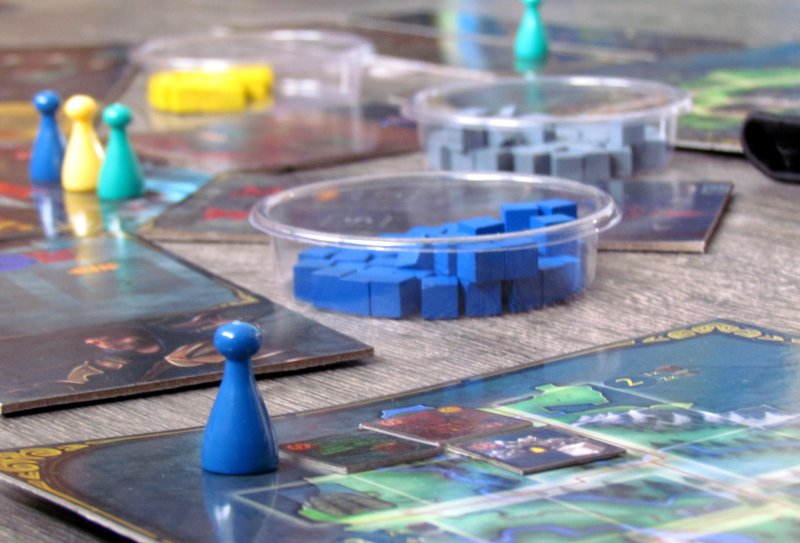 Also a series of colored game pieces is prepared for players, small round ones (280 pieces!). There is also smaller number of other cardboard component, including eighty down money tokens (chaufoins), buildings and three cards for each of the available nations. Box has two different rulebooks – advanced rules and also instructions for family game.

Thus, at the beginning of the game, players put board together in the middle of the table and connect varying lengths of seven rays, which should have set their default values. Within each frame, players find value of the material and demand for each source printed in gray and mark it. Building tiles are sorted only to find those buildings, that are intended for current number of players.

Each player must choose a race, which has color assigned, together with four pieces and a trio of specific action cards. They are deployed into their first city, on miners counter, one becomes warehouseman and last will be showing players turn order. According to the nation board, each player will also receive a starting amount of money and even some buildings. Among those left, buildings are randomly selected to create offer, that will shift with time. 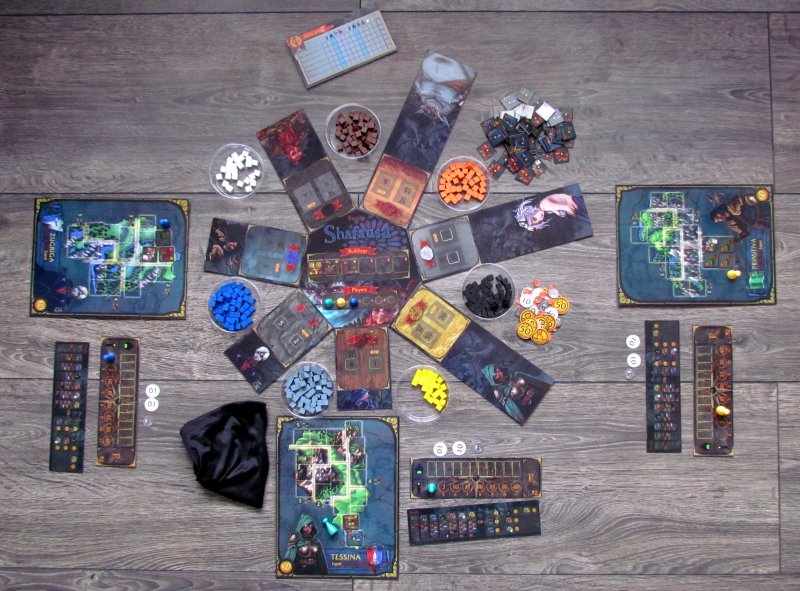 Players go together through one phase to another, until they reach end of the round. At the beginning all mines are expected to produce their raw material. To do this, players need to own a mine, because the board amid serves only to track buying and selling prices. Produced resources go to players possessions.

Then first competition will determine playing order for the entire round. Players can bid in open auction always one penny. But the auction is binding, so whenever a player gives up, he must pay the corresponding amount of money and put his piece in highest free spot on order scale.

Benefit of being first can players spend (together with resources) on buying plans for one of the available buildings (they can only own one of each type). They can only lay it ahead. In addition to this, they can each round build maximally two warehouses with increasing cost displayed directly on their boards. This is, where building a new one is marked. 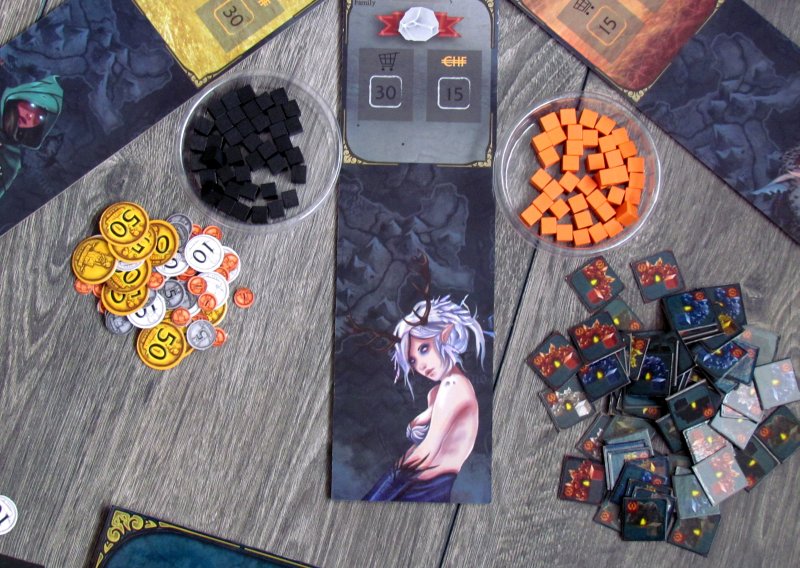 Then players can pursue their own mines all at once. There is no reason to wait for the others. They can use purchased buildings and put them into their city. But there is also possibility to build mines, increase number of miners, buy goods for given price or conversely sell it. Player must have sufficient storage capacity in warehouses for their resources. If player failed to build some buildings and still owns its plans, he must now pay one chauffoin for it.

Once price of all goods, that was traded in this round, is adjusted (decreased), it is time for the final and very important element of each round. Using speculations, players can influence price of goods on the market. Each type of resources can be influenced only once and always by paying one or more coins.

Game ends, when one player can fill his eleven warehouses or build five cities. But that player can not celebrate yet, because winner will be decided by points awarded not only for the city and warehouses, but also for miners, buildings and bonus points for the fulfillment of certain conditions. Only after this sum, it is clear, which player is the winner. 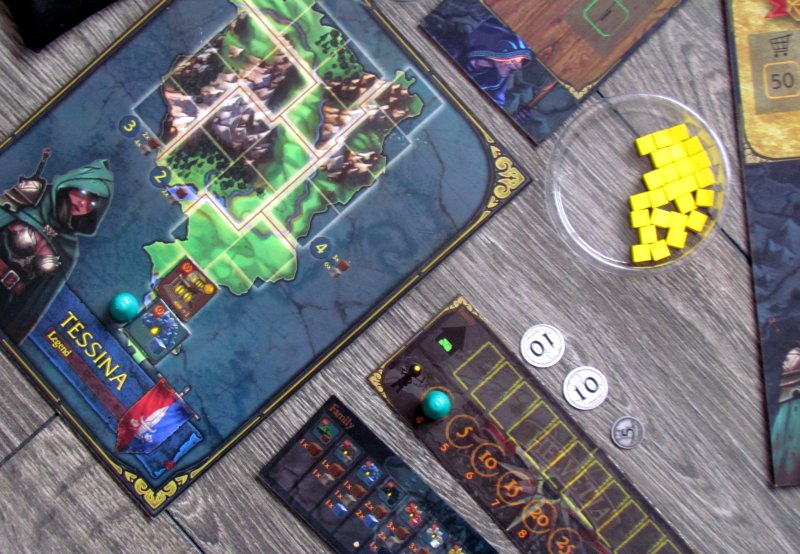 Shafausa is an economic game and nothing more. Actual theme in a fantasy world is not enough this time, because players remain only merchants. So the whole atmosphere of the game depends on whether you love exchanging stuff and affecting supply and demand. These are basic and most important things, which the game is about.

Fortunately, it at the same time does not mean, that game has to be necessarily bad.. If you like that kind of stuff, keep reading. Its the contrary, because what it does, it can do really well. This highly depends primarily on the aforementioned market prices. These are common and are moved within each purchase. In addition, players themselves can influence them. Very important is also town itself, which belongs to individual participants of the game. Their management and construction of buildings is another step on the road to victory.

Even Shafausa includes classical (for Helvetia Games) variability across races, with which we met in Unita. Each of them has their own cards, that give a bit flavor and difference in otherwise clearly lined course. And game even includes an auction. 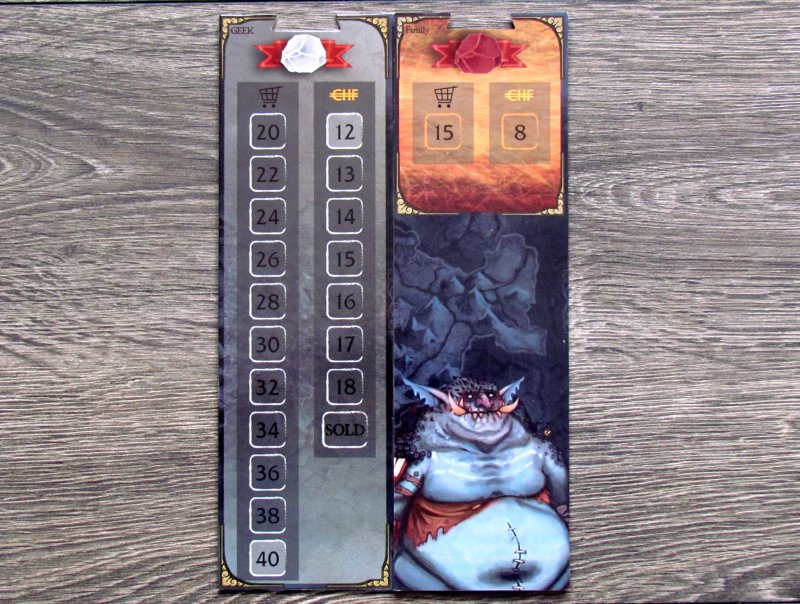 You will find three options of play inside the box, which can be used according to experience of players. Easiest one is designated as a family entertainment as it omits some complicated mechanisms. Second in the ranking is already full-featured with all the trimmings of the game. Third (colonial) then rather adds another variation to start of the game and is really only version of the rules for geeks.

Playable variants are closely related to the game time, ranging from one hour for family game through to two, that can last one full game. For whole their time in the game, players will not interfere and influence each other, only indirectly. It currently suggests, that number of participants will not have a significant impact on the experience, which is true.

Graphics are great, having nice illustration, but its all a bit lost in a lot of dark shades. This also reduces overview of the individual elements and segments of the game. Tiny gold coins are a bit harder to handle, but it is only a minor detail. Overall, however, there is a real bundle of components, and it all looks very nice on the table, especially in the economic game. Unfortunately, rules manual is not written clearly and it all makes learning this game tough, with many question remaining unanswered. 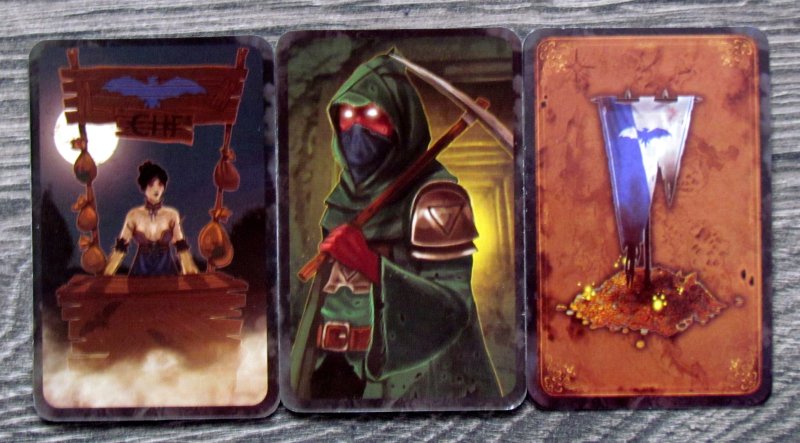 Shafausa is a game only for certain audiences. Those players, who like to gopher raw materials, transform them into another and sell with profit. They should enjoy each price shift on the market. Economy in this game works nicely and is interesting. Theme could be any, but we appreciate constant usage of one of the world of Helvetia. Shafausa will disappoint those of us, who expect some fantasy. But on the other hand, it will be fun for those, who like to manage their resources and raw materials in real life or in the game.

Shafausa is a game, in which you get in charge of managing mining economy of one fantasy nation. They are slightly different, but one and all have the same chances of winning. It always leads through the market, which can be affected and its the only way to earn the biggest fortune. Players manage their own cities and constantly trade. But they practically do not know, that there are adversaries sitting beside them, since it lacks interaction. In addition, first game will not be easy: rulebook is very unclear. Beautiful processing is spoiled by too dark graphics. However, in terms of gameplay, it will please not only with three variants, but also because everything works. Shafausa is a good choice for players, who constantly recalculate coins in their pockets.