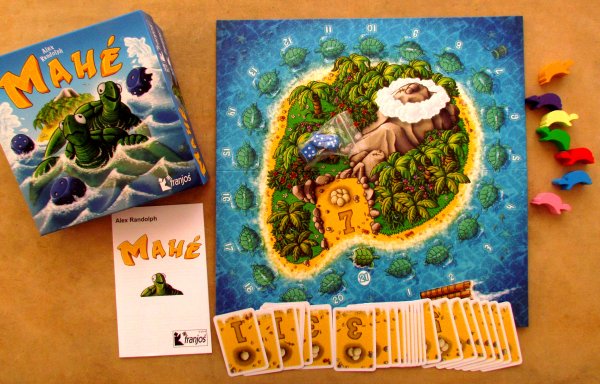 Races around the island. It seems like a good and simple idea to spend a sunny afternoon. And wonder of wonders, it seems that it will finally happen! Pirates only passed our island today on their barge, gull referees are all in place and dolphin is ready to give the starting command. And so finally, after five unsuccessful attempts, we shall finally see, which of us siblings is the fastest. One big, happy, racing family.

At the start, we must also dress as one of the turtles. Alex Randolph will help us with the racing stuff, because his game Mahé was published by German label Franjos Spieleverlag in 2014 and was presented at the fair Spiel 2014 in Essen. We brought it home with us, test, and now, a little late, you can read about it, too.

Under the lid with two racer turtles and trio of blue dice, that splash merrily on the waves of the sea, we find first of all a game board. And it can be made of nothing else, than green meadows creating nature, where these creatures live. Mainland is surrounded by numbered boxes, each in shape of a turtle. This is route for the race. Upper floor of the box also shares white booklet with rules in several different languages. 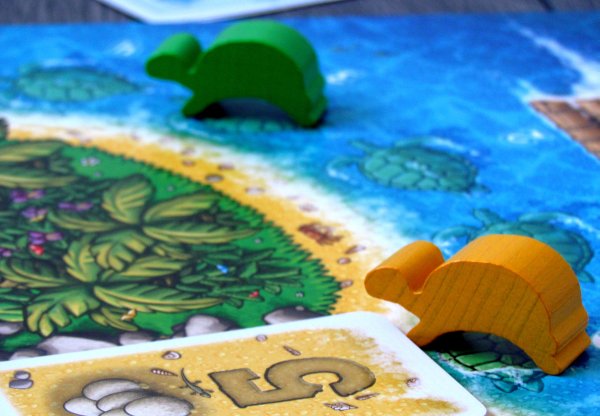 Downstairs, its just a set of cards, that are numbered according to number of eggs from one to six, trio of blue hexahedral dice and turtles. They are particularly hilarious, big and there is a total of seven. It also coincides with maximum (unconventionally chosen) number of players.

At the beginning of the game, each participant chooses one turtle and puts her on a raft. This is the starting box next to the number one position on the track. Of the 24 eggs cards, four are randomly discarded and put back into the box. Deck containing the remaining twenty pieces is placed on the island space with seven eggs and top card is revealed.

Starting player gets a trio of dice, as well as every player, who will get in turn after him. However, nobody will be able to roll them at once, but gradually and add digits nicely together. Player tries to finish with sum lower than seven, but at the same time roll long enough to make his number as high as possible. The more dice he uses without jumping over sum of seven, the farther his turtle will swims. In the case of success with a pair of dice, the result is multiplied by two and when all three were used, if it is even tripled. 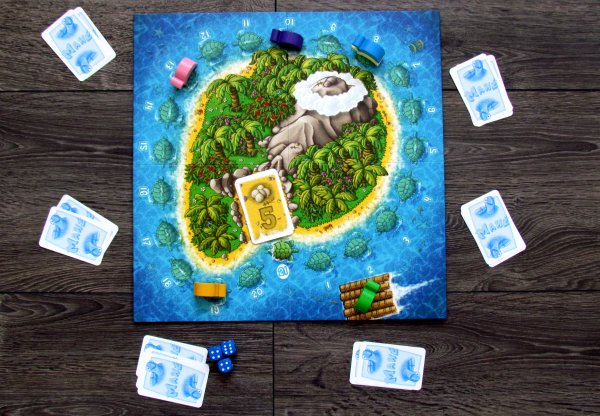 But excessive greed and a bit of bad luck leads to player’s turtle no chance of movement. It goes back to the raft and will have to start again next round. Referee has seen it cheating from the air very well.

Turtles swim clockwise according to numbers positions. However, there is a twist in all this, because as soon as the turtle stops at spot, where another one rests, it climbs on top of it. Player at the top can be hitchhiking a ride a bit further. Moreover, he has a very important privilege – owner of the top turtle can command lower turtles to roll a second or even a third dice, once they are doing so. The decision is no longer free. However, in the event of failure (higher than 7), both turtles must return to the start.

Once one of the players manages to circle the whole round, his turtle might lay some eggs. To indicate that, a player takes the top card and places it in front of himself with digit down. He reveals new card and game continues until supply of cards is exhausted. At that moment, turtles can expect sudden conclusion. Anyone, who now crosses the finish line as first to report 21 tempos, he receives seven bonus points. Game then ends and players summ up eggs laid by their turtle. Whoever has most of them is the winner. 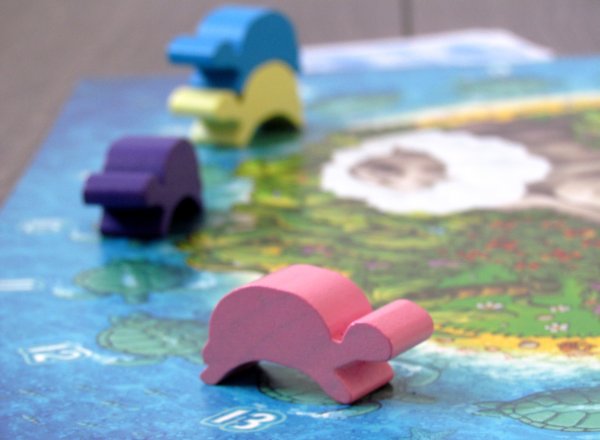 Mahé is here and with it the next game, in which players can climb on each other’s back. At first glance, you get the impression, that the game will fight for support of fans with Camel Race (review), Banjooli Xeet (review) or even Sheep Race (review). But all of these games are focused on picking outcome and then attempt to fulfill it with proper motion of figures.

But this time, players have a clear mission from the beginning. There is nothing hidden and you even do not attempt to deny your intention from others. Each turtle has its clear proponent and only he can move it forward. And this is where three dice, that are rolled gradually, play the most important role. It is up to the player, whether he decides to move slowly or rolls mindlessly, taking chances. At an absolute fortune, he can move as much as 21 fields forwards (seven times three)!

Because each circle around island means only gaining cards and not victory, sometimes it pays to really gamble and go for it. And this idea sets this game apart from any other game, where players need to simply hold to their previous selection. This risk business is a source of true fun. Mahé is therefore a great family game, appreciated by beginners or participants in a smaller party. 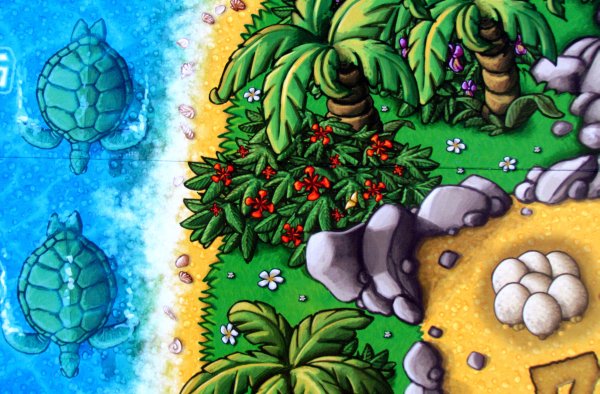 Maximum seven players offer fantastic experience, but even with less players, game is nowhere near boredom. A big factor in the game is also movement and using other turtles to your advantage. And that is, why it is necessary to control more colors with two or three opponents, so there are at least four turtles on the track.

That does not mean, that game needs something more. Most battles take place on the window of thirty minutes. Number of simple rules make it a good adept for smaller players, who can enjoy it with the knowledge of basic multiplication. Recommendation for age of seven years can even be reduced to six. This is great news for families.

Mahé is a simple game, that lets players take the risk. And not indiscriminately, but deliberately. Risk, that this time really pays off. Moreover, entire game looks really sunny and will delight not only by fun, but also due to processing. Mahé is simply ideal family entertainment, if you do not mind kick of luck in it.

Mahé is undemanding family game, which allows you to take risks with dice in your hand. You will not be too much in control of their result, but you can always give up more rolling and move just a bit further. First roll is simply an automatic success and luck decides only, when player decides he wants to move further. But the risk is important and often pays off. This ensures tension, twists, interesting course, but also speed of the whole game. It is suitable for everyone and even small schoolchildren, who will enjoy the fun with turtles. Mahé is a really good chance, how to race. And gamble.