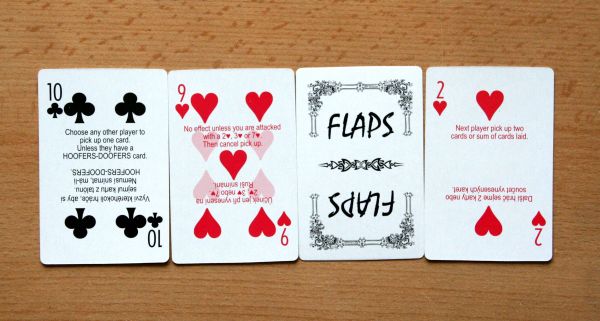 Today we bring you an interview with a british card game designer. His name is Paul Feagan and he is a creator of card game Flaps (czech review).

Hi, we apreciate your effort put in the card game Flaps. We are glad, that this game is sold in Czech Republic and we decided to ask you a few questions about how the Flaps game came to life.

How long have you been fan od card games?

I have played different card games since I was a child growing up in England. Some of the games were simple English children’s games, such as Old Maid (Cerny Petr) and some were more complicated, such as Trumps. Many of these provided the inspiration for cards within the Flaps Card game.

You started to create new cards in 1984. What led you to this decision and how difficult were the first steps?

Back in 1984 we were playing with standard cards and I would use tippex (liquid white typist correction fluid) to white out the cards and write new rules on them. Then I would add them to the game and see how players liked them.

When exactly did you create “Flaps” cards, which gave the whole game name? How they evolved and how were they accepted by your players group in the beginning?

I’m not sure when the Flaps cards were added but it would have been ’84 or ’85. I remember tippexing out the 6s and making them 4s. The modern pack still only has one 6, even though I could have put the 6s back. Because everyone had to say ‘Flaps’ when they laid the 4s/6s, the game became known as Flaps. 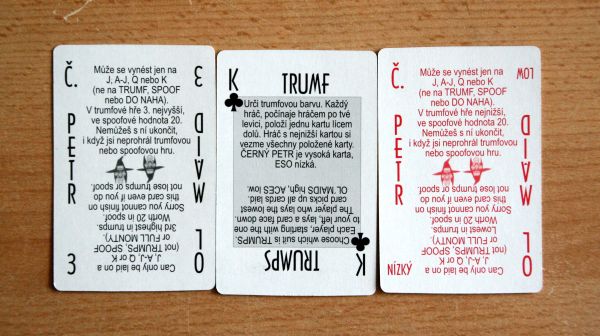 We like the games in game (TRUMPS, SPOOF). How did you create these complex mechanism and was it hard to test it?

Trumps is based on a complete game called Trumps, which is a simple form of the popular English game called Bridge. So I just incorporated the best part of that game into Flaps. Spoof is based on a pub game where each player has three coins and can choose to put zero to three coins in their hand and put it on the bar. Then each player has to guess how many coins are being held in total to win some money. I just changed it to be the numeric value of cards.

What is your favourite card in the whole game, in case there is such one?

My favourite card is the Mega-Flap card, because if you have an Ace’n’Lay (any red card), Mega Flap and three Flaps, you can win the game by saying “Ace’n’Lay, Hearts, Mega-Flap, Flaps, Flaps, Last Card, Flaps.

Your Flaps game allows players to play defensively and with more strategy, than in the original game. Was that you goal to add more strategy to the whole card laying concept or was it just variability and strategy was only a by-product?

When we first played the game with standard cards it was too easy for someone to win just by chance. So I added cards to provide some advatage through strategy and defence. I hope that made it more interesting – a bit like chess in a card game.

The game can be played on many different levels. That’s great, because people can select only cards, they want. How have you divided the cards in these six advanced groups?

The cards in level 1 were all the cards that were made in the first few years. I think now that maybe 10s and Hoofers-Doofers and Ace’n’End could have been level 2 as people seem to struggle with those when they are first learning. The other levels were added later when computer technology allowed me to print out card images on paper and stick them to the cards. I am always thinking of what could be in the next level. In fact anyone with a pack could make up their own level and create a custom card or cards for it.

The most important thing is that new levels don’t destabilse the game. For example, don’t add a card that has super-powers as that would be too strong. 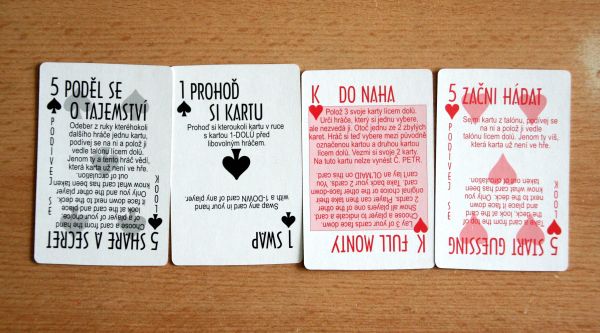 What was the breaking point, where you decided to publish the game? Was it hard to get it published?

The first published sets of Flaps only went to Level 3. I created the card images and paid for the sets to be made as I couldn’t find a publisher.
Since then I added more levels by making cards on a laser printer. Then in this new version, I added all the levels that I had made since the last publication.

Was it difficult to come with such ideas? Who or what was your muse?

Some card ideas come from other card games, some from pub games. The Full Monty came from a mathematical question called ‘The Monty Hall Problem’.

There was an American TV Show called ‘Let’s Make a Deal’ and Monty Hall, the host, would present the contestant with three doors, behind two would be a cheap prize and behind one would be a sports car. Monty would ask the contestant to choose a door, then, without opening the door they chose, he would reveal a cheap prize behind another door and offer them the chance to change their choice. The mathematical question is – should the contestant stick with their original choice or choose the other door? This has since been proved that you should always choose the other door. So I’m trying to create a similar controversy with the Full Monty Card.

How did you and Martina Krupickova meet and who came with the idea to bring this card game especially on czech market?

Martina and I met when I was working for Ceska Sporiltelna in Prague.

Martina really liked the English version of the game and I also realised that Czechs are thinkers and problem solvers who would enjoy the game.

Martina encouraged me to re-design the cards so that they were in both English and Czech.

Is the game available anywhere in the world except Great Britain and Czech Republic?

Flaps is available from the website so anyone in the world can order it.

But so far it is probably played mostly in England and Prague.

Are you watching the whole board/card game industry, which is growing intensely for the past few years?

Yes I do look at the board/card game industry and sometimes go to toy fairs to see what new games have been invented. I’ve bought some games at toy fairs that have never made it into shops and maybe have one of the few copies made.

Do you play any of these modern board games?

I only play Flaps as a card game now. For board games I like Monopoly, MovieMaker and Masterpiece – hmm all games that begin with M.

Have you any plans for the future in this area, whether it is new Flaps cards or brand new game?

I had an idea for a board game where players have to race around the world and answer questions about each country they visit to earn money to pay for their next flight. A bit like trivial pursuit with travel. So maybe you will see that one day!

Thank you for your time.
Team of DeskoveHry.com