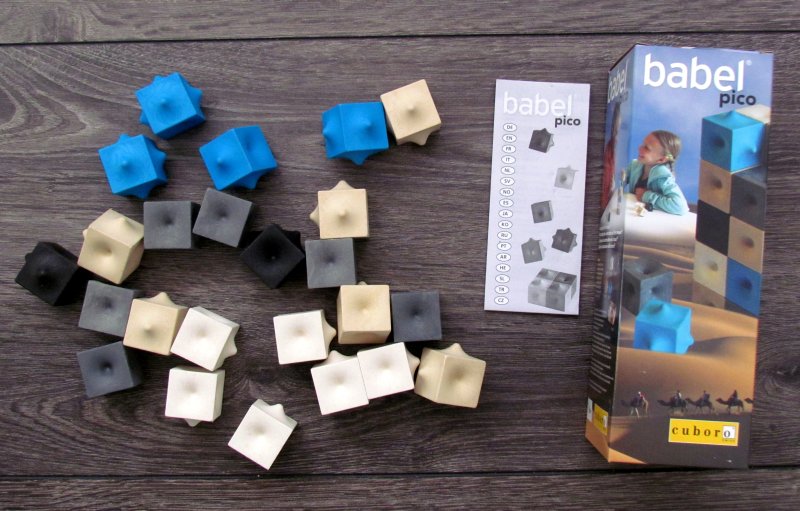 This tower should be the tallest building the world has ever seen. Just such assignment was at the birth of this creation. But while somewhere in the territory of Mesopotamia grew a building, whose goal was to touch the sky, at the same time somewhere else, the natives built their own tower. For them, it was enough to reach higher, than any other building around. Nobody teaches about it today, but it was small European Tower of Babel.

Babel Pico could really be that tower and preferably located in Switzerland, where a new board game of the same name was published. It whole story is based on Cuboro building systém, that originated decades ago and is still being produced from wood. But thanks to a team of successors of Matthias Etter, these cubes created pyramid in 2009. It was not first, as its history goes back to 2002, when it was published first with colorful polka dots.

The mere box already builds a tower, because cubes can be found in high packaging. Along the perimeter of the box, we see the scene of happy building in one family, as well as a caravan of camels – some pilgrims are heading out to the original famous high tower of Babel. 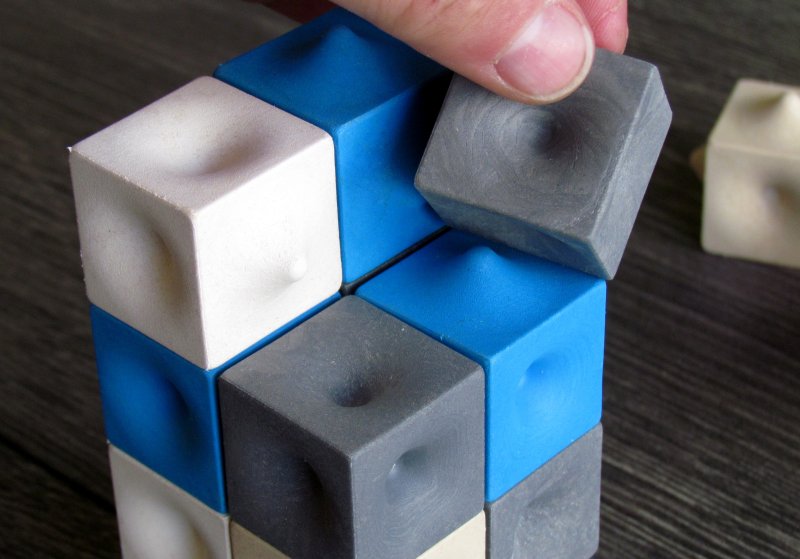 But we do not have to wander too far, because entire tower in the form of 24 blocks arrived to our home. Upon closer examination, we easily figure out, that construction cube differ by color, number and position of spikes. And while there are light blue pieces with four spikes, there are smaller numbers of pointing up and there are cubes with only holes in them. Either sting or hole, each side of cube has to choose from this two endings and only their distribution, and ratio is different by color.

Sheet of rules is quite thick not only because of vivid images explaining the right moves, but also as a result of instruction in seventeen languages. And one of them is Czech, just like in a ball Cuboro Tricky Ways: Fasal.

Building the tower is a task only for the two warring adversaries. So everyone gets exactly half of the building blocks and will thus have five, three, two and one piece from each kind. Nothing else is necessary to setup the game. 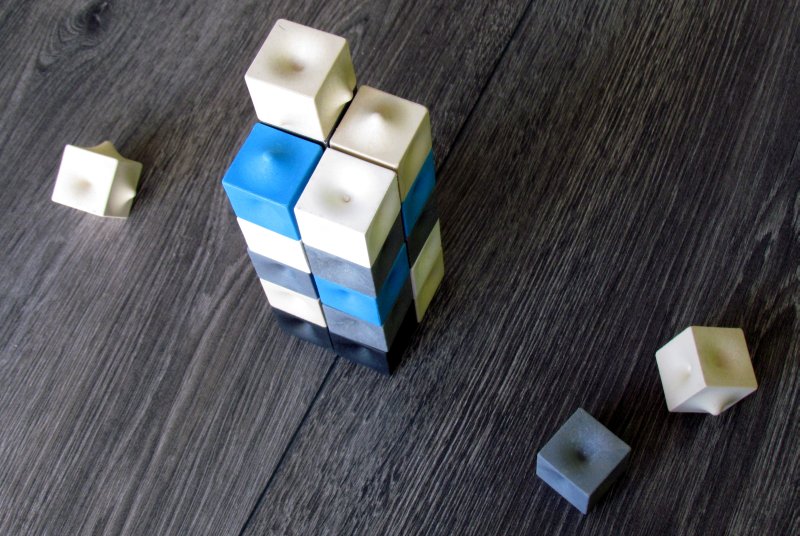 And then it’s clear. Players take turns placing cubes one after the other, observing a number of binding rules in the process. First is size of the tower itself. It may never have a base of more than two times two cubes. Players then can never start building a new floor, until the previous one is completely finished.

But surely you must be aware, that protrusions and depressions have their own sense of importance. In the first place, they should not be pointing out of the Tower of Babel anywhere. And so it would seem, that placing stones is pretty simple. But only until the moment, when you will learn, that each hole in a nutshell is to be filled with one spike. And here starts a big hemlock.

Players alternate and tower is rising to a height of its maximum of six floors. But game can often end much sooner, when one player simply can not continue. Once someone can not place any of his remaining stones according to the rules, that participant is fired and his opponent immediately becomes winner of the game. 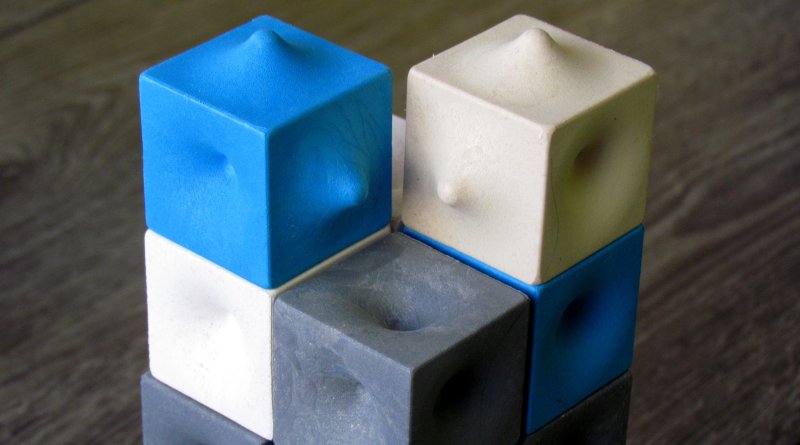 Babel Pico is an interesting abstract game for two players. Tower is built step by step by placing stones of your choice. Initially, it seems that decisions do not have too much weight, but towards the end, as the number of choices narrows, it is clear, where you made a mistake at the beginning. But now it is too late to rectify it. Maybe next time.

Advantage is that each of these matches and positioning of a maximum of 24 stones is quick and rarely lasts longer than fifteen minutes. That is good, because such a nice filler is completely right with its theme and gameplay. Perhaps, you will play again straight away.

Stones come only in few types, so you will very quickly remember their shape. You can then concentrate solely and entirely on choice of the right block for the moment. All are important, but it is not good to keep the ones with a lot of edges sticking out for the end. It is simply necessary to get rid of blue at every chance. 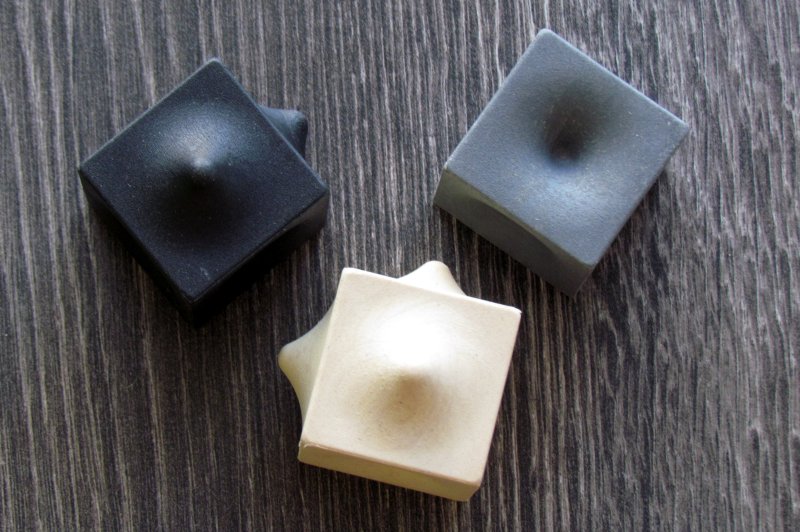 Unfortunately, the game has one negative aspect or actually a disadvantage. It applies to starting players, who not only choose first stone of the whole building, but decide about starting rock for every floor and it he has freer hand than his opponent. Thankfully, because it is possible to place stones diagonally from each other, this advantage is not so crucial. But its still quite an advantage.

Game can not end in a draw. If you play a move, after which you will not be able to continue, it does not mean defeat. Indeed opponent has to play stone from his supplies and only then you lose. So sometimes it is possible to use suicide tactics, because supply of blocks of both players is public.

Babel Pico excels in processing. Otherwise, its actually a simple abstract game in a limited space. Players must cleverly use their stock of cubes, so they prevent opponent to play his and keep their own chances for another turn. Babel Pico is a nice abstract game, but is not anything exceptional. 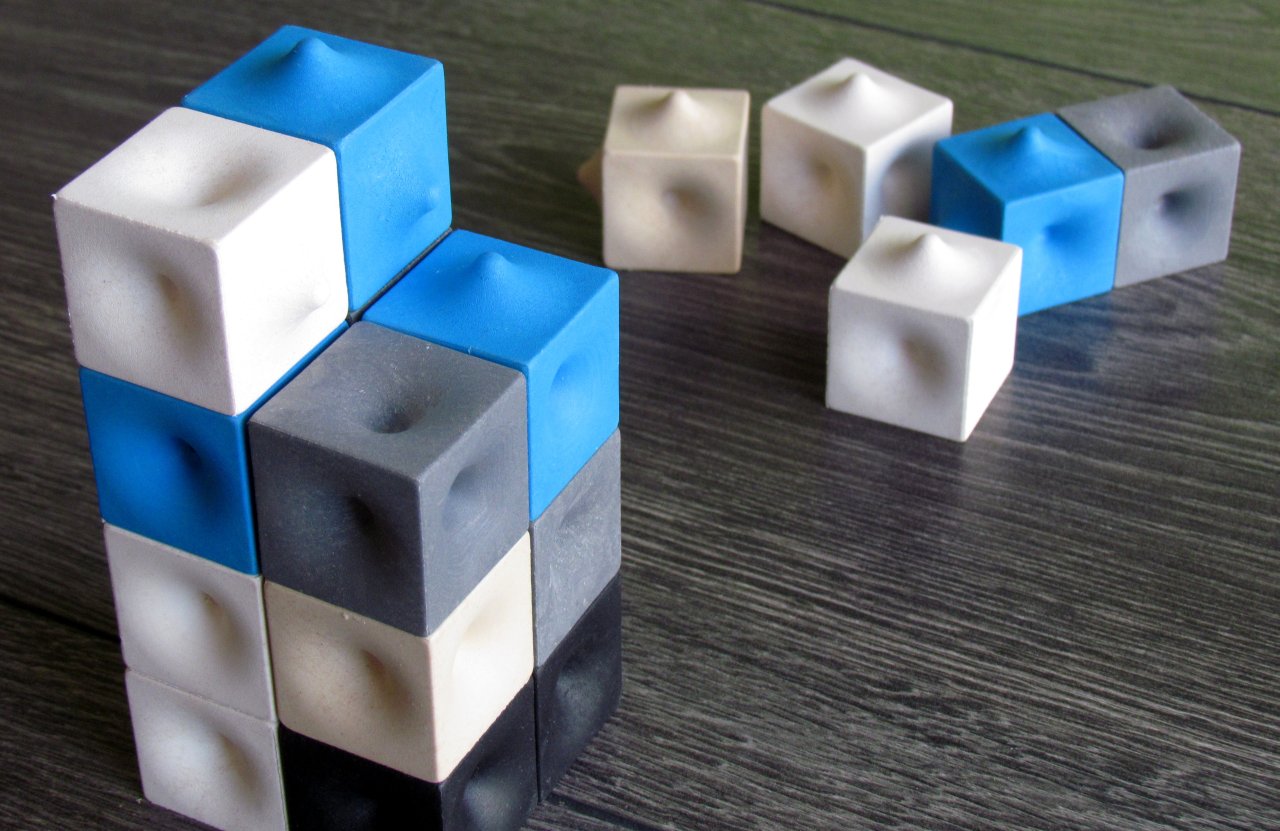 Review: Babel Pico – build the Tower of Babel
Babel Pico is an abstract game about building tower of stones, but you can not connect the dots just like that. Some push others out, while the correct ones will stick firmly together. Only the combination of thorn and hole may be base of a proper tower. But players have different shapes of blocks, that need to be combined and improve their chances over opponent. Its not easy. That is why the game nicely coaches spatial imagination, is exciting and quick. Winner will emerge towards the end of the game, so players feel, that the beginning of the game is not entirely under their control. Additionally, a lot depends on who will perform the initial move of the duel. But otherwise Babel Pico only average, although luxuriously prepared game.

Recenze: The Key Murder at the Oakdale Club